The Cathedral Basilica of St. James is the cathedral church of the Diocese of Brooklyn. It is located at the corner of Jay Street and Cathedral Place in Downtown Brooklyn, New York City. It was built in 1903 and designed by George H. Streeton in the Neo-Georgian style. 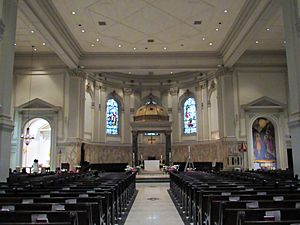 Interior of the cathedral basilica.

The first church was built in 1822-1823 and dedicated to the patronage of St. James by Bishop John Connolly on August 28, 1823. It became the cathedral of Brooklyn when the diocese was established in 1853.

Brooklyn's first bishop, John Loughlin planned a new cathedral dedicated to the patroness of the diocese, the Immaculate Conception and its construction started in 1868 in Fort Greene, at Green Street and Clermont Avenue. The cornerstone for the new cathedral was laid, and the walls built to a height of 10 to 20 feet before construction was stopped due to inadequate funds; of the planned complex, only a chapel (no longer extant) and the Bishop's residence (now LaSalle Hall of Bishop Loughlin Memorial High School) were completed. In 1896, Louglin's successor Bishop McDonnell designated a St. James Cathedral a pro-cathedral, anticipating the completion of Immaculate Conception. Although the current church on the original site was built in 1903, it did not became a cathedral again until 1972. The newly elected Pope John Paul II visited in 1979, and formally designated it as a basilica in 1982.

All content from Kiddle encyclopedia articles (including the article images and facts) can be freely used under Attribution-ShareAlike license, unless stated otherwise. Cite this article:
Cathedral Basilica of St. James (Brooklyn) Facts for Kids. Kiddle Encyclopedia.