The Cathedral Church of St Marie is the Roman Catholic cathedral in Sheffield, England. It lies in a slightly hidden location, just off the main shopping street in the city, but signals its presence with a tall spire. It is an especially fine example of an English Roman Catholic Church, with much fine interior decoration. Re-ordering of the Sanctuary following the Second Vatican Council, has been sensitive. There are several particularly notable side altars, as well as statues and painted tiles.

Before the English Reformation the Church of England was part of the Roman Catholic Church, and Sheffield's medieval parish church of St. Peter (now the Cathedral Church of Saint Peter and Saint Paul) was the principal Catholic church in the district. In 1534, during the reign of Henry VIII, the Church of England split from Rome, and Catholic worship was outlawed. Until the 18th century, Catholics faced fines, loss of property and social exclusion, and Catholic Priests were hunted down, imprisoned and martyred. The main landowners in Sheffield were the Dukes of Norfolk, and the Shrewsbury Chapel in the now Anglican parish church remained Catholic until 1933. During the reordering of St Mary's in 1970, at the invitation of the Anglican Cathedral, Mass was celebrated on the altar of the Shrewsbury Chapel once again. The Altar still retains its Catholic consecration crosses, and relics, making this possible. Mass was celebrated in a few houses of gentry in Sheffield, including in a house on Fargate that belonged to the Duke of Norfolk, which had a hidden chapel in its roof.

The establishment of the Church of St Marie 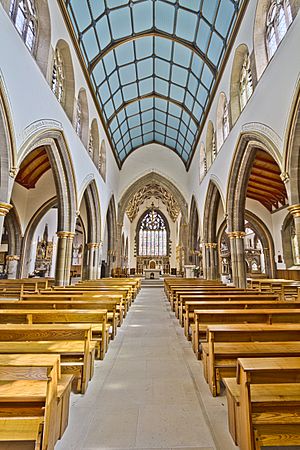 The nave of the Cathedral Church of St Marie

The Catholic Emancipation of the late 18th and early 19th century allowed Catholics to worship more openly. Sheffield Catholics bought the ageing house, which stood on the corner of Fargate and Norfolk Row. They built a small chapel in its back garden on a site which is now between the Mortuary and the Blessed Sacrament Chapels. The names of the priests who served Sheffield before the Cathedral was built and the dates of their deaths are on the wall of the Mortuary Chapel. The rest of the land where the Cathedral now stands became a cemetery (Bodies from the cemetery were moved to the new Catholic cemetery at St Bede’s in Rotherham and work on St Marie’s began). By 1846 the chapel was too small and the young priest, Fr. Pratt, was keen to build a church for the expanding town. A leading local architect called Matthew Ellison Hadfield designed St Marie’s, based on a 14th-century church at Heckington in Lincolnshire. The church was expensively decorated with the aid of generous donations from the Duke of Norfolk, his mother and parishioners. Fr. Pratt died while the church was being built and was buried at St Bede’s. However, a stonemason, who had often heard him say he wanted to be buried in St Marie’s, dug up the coffin and re‑buried Fr. Pratt in a tomb he had prepared near the altar. Fr Pratt’s body still lies there and a plaque marks the spot, but his effigy has been moved to beneath the altar in the Mortuary chapel.

St Marie’s was completed in 1850 and opened on 11 September. Building the church cost more than £10,500 – a huge sum in those days – and it was not until 1889 that the church was free from debt. The Parish of St Marie’s, which covered the whole of Sheffield, became part of the Diocese of Beverley when Catholic diocese were re-established for the first time since the Reformation in 1850. In 1902 a new presbytery, now known as Cathedral House, was opened. During the Second World War a bomb blew out stained glass windows in the Blessed Sacrament chapel. The remaining windows were removed and stored in a shaft at Nunnery Colliery. The mine flooded during the war, the glass sunk in mud and drawings for re‑creating the windows were destroyed, however it was still possible to re-install the windows in 1947. When St Marie’s was re-ordered in 1970, following Vatican II, dark woodwork was removed and new lighting and benches were installed. In 1972, a new altar, allowing mass to be celebrated versus populum, was consecrated by Bishop Gerald Moverley, auxiliary Bishop of Leeds. The church building has been a Grade II listed building since 1973.

On 30 May 1980 the new diocese of Hallam was created and St. Marie’s became a cathedral. Bishop Moverley was installed as its first bishop and served until his death in 1996, after which Bishop John Rawsthorne became the second Bishop of Hallam.

An extensive programme of renovations caused the cathedral to close in September 2011, re-opening in November 2012. During that time the sanctuary was extended into the crossing and reordered, a new cathedra was installed and the choir moved to the west end of the building. Side chapels and roofing was restored, in some cases revealing original features previously hidden. New heating and toilet facilities have also been installed.

All content from Kiddle encyclopedia articles (including the article images and facts) can be freely used under Attribution-ShareAlike license, unless stated otherwise. Cite this article:
Cathedral Church of St Marie, Sheffield Facts for Kids. Kiddle Encyclopedia.