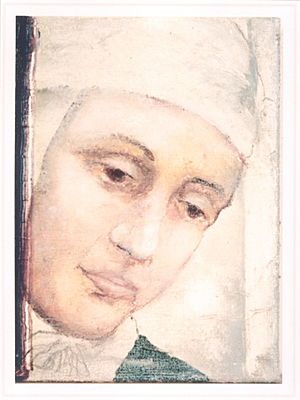 Sister Anne Catherine Emmerich (September 8, 1774 - February 9, 1824) was a German Augustinian nun. She is remembered for her mystical visions of Jesus' and Mary's lives. What she saw was written in books, for example, The Dolorous Passion of Our Lord, Jesus Christ. The book later had an important part as a main source of information for Mel Gibson's movie The Passion of the Christ.

She was stuck in bed when marks of stigmata showed up she had doctors and physicians examine her markings, and it was found to be a genuine stigmatic case.

All content from Kiddle encyclopedia articles (including the article images and facts) can be freely used under Attribution-ShareAlike license, unless stated otherwise. Cite this article:
Catherine Emmerich Facts for Kids. Kiddle Encyclopedia.