Catweazle is a British children's fantasy television series, starring Geoffrey Bayldon in the title role, and created by Richard Carpenter for London Weekend Television. The first series, produced and directed by Quentin Lawrence, was screened in the UK on ITV in 1970. The second series, directed by David Reid and David Lane, was shown in 1971. Each series had thirteen episodes, most but not all written by Carpenter, who also published two books based on the scripts.

The premise in the first episode is that an 11th century bumbling wizard, named Catweazle (Geoffrey Bayldon) is pursued by soldiers through a wood, carrying only his magic charm and his toad familiar (a familiar is a supernatural entity). He says a spell as he jumps into a pond. When he comes out he thinks he has made the wood and soldiers disappear, but in fact has jumped 900 years.

He arrives on a farm in rural England in the year 1969 and befriends the farmer's son, a red-headed teenager, Edward Bennet, nicknamed Carrot (Robin Davies), who spends most of the rest of the series attempting to hide Catweazle from his father (Bud Tingwell) and the farmhand Sam (Neil McCarthy). Catweazle searches for a way to return to his own time while hiding out in a disused water tower on abandoned Ministry of Defence land, which he calls Castle Saburac, with his familiar, a toad called Touchwood (a pun on touchstone). Luckily, whenever he is spotted, he uses his magic amulet to hypnotise people into forgetting that they saw him.

The second series featured a 12-part riddle that Catweazle, now in 1970, attempts to solve at the rate of one clue an episode, the solution (as he thinks) being revealed in the 13th.

A third series, which was apparently to be set on the Bennets' farm from the first series rather than the stately home of the second series, never got past the drafting stage.

Catweazle mistakes all modern technology for powerful magic (an example of Arthur C. Clarke's third law that "Any sufficiently advanced technology is indistinguishable from magic"), particularly "elec-trickery" (electricity) and the "telling bone" (his interpretation of the voice issuing from a telephone handset). Often he tried spells that failed and he would sigh "Nothing works". Feeling flushed with success in the final episode, his last words were "Everything works Touchwood, everything works!".

Both series were shot on 16mm film. The first series was mostly shot on location at Home Farm, East Clandon, near Guildford in Surrey, England in 1969. The second was mostly filmed around the Bayford/Brickendon area of Hertfordshire in 1970 (S02E12 shows scenes of Brickendon and near Bayford station). Interior scenes were filmed at Halliford Studios in Shepperton.

Both series centred on the relationship between Catweazle and the young lad from the present day who quickly accepts Catweazle as a friend. The second series had a more farcical character than the first. In the plaster fight scene in the episode 'The Enchanted King'. Cedric's parents were slightly unhinged gentry living in their family stately home. Almost all characters seemed out of touch with reality except Cedric. In the second series Catweazle sings/speaks to himself using the series theme tune.

Although Bayldon thought the story had run its course after two series, he still praised the second, commenting that two episodes were, in his view, below standard, but not written by Carpenter: "There are two episodes I felt that with; the rest I think are lovely. I thought they were dreadful, but they were not written by Richard. They were written when we were behind." 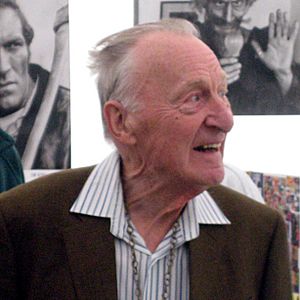 Geoffrey Bayldon (2009), Catweazle with "elec-trickery" in his hand behind him.

The series was more an echo than a continuation of series 1, and apart from Catweazle himself, all characters were new. Peter Butterworth who appeared in one episode in series 1 appeared as a more continual character (in a new role) in series 2.

Catweazle's home in series 2 was an abandoned railway building at "Duck Halt". His child contact this time is Cedric, an only child living in a very large mansion house.

In the 1980s, Carpenter announced that he hoped to adapt Catweazle into a feature film. However, the planned film was never produced.

Both series of Catweazle were released on VHS in 1998.

The first series was released on Region 2 DVD in the UK in May 2005, with a short reunion documentary "Brothers in Magic" and audio commentaries on selected episodes by Carpenter, Bayldon, Davies and Executive Producer Joy Whitby. The second series was released in August 2005.

In Australia Catweazle: The Complete Series was released in May 2007. In June 2011 both series were released in Region 4.

On 29 March 2010, the series was re-released in the UK to commemorate its 40th anniversary. Among several other additional features were a "Westbourne Museum" image gallery (named after a small local museum in the episode "The Curse of Rapkyn" starring Peter Sallis) featuring the most comprehensive collection of original Catweazle memorabilia and promotional ephemera ever assembled, sourced from The Paul Pert Screen Collection. The release of the 40th Anniversary Special Edition DVD set was also accompanied by a commemorative publication, The Magic Book by Simon Wells and Paul Pert. Robin Davies (who had played Carrot) died just before its publication, on 22 February 2010, at the age of 56. The publication includes an article by Pert about the longevity of the Catweazle phenomenon, entitled "A Magical Spell in the Countryside," which contains Robin Davies's last recorded comments about the series that made him a star and about his special friendship with Bayldon. The DVD image gallery also recorded the occasion of their last meeting at an annual commemorative event held at the farm in East Clandon, Surrey, where the first series was filmed in the summer of 1969.

Also featured in the article was an interview with Richard Carpenter in which he gave a frank account of his thoughts on modern television, and again expressed his desire to bring his writing career full circle with a Catweazle film for the 21st century. He also confirmed that he had drafted a new script. Negotiations for a film had reached pre-production stages when Carpenter died while walking his dog in the countryside at the age of 82 on 26 February 2012.

The first episode is available to view in full at the BFI Screenonline site.

The full series is being re-run on the UK free-to-air television channel Talking Pictures TV from Saturday 2 November 2019.

There are two novelisations by Carpenter, one for each series: Catweazle and Catweazle and the Magic Zodiac. Both books were illustrated by George Adamson. A 20-page picture book, Catweazle in Marrow Escape was also produced, written by Alan Fennell. A comic strip version featured in the TV comic Look-in, written by Angus P. Allan, and three annuals were also released by World, from 1970 to 1972.

A German movie version is to be released in March 2021, featuring German Comedian Otto Waalkes as Catweazle.

All content from Kiddle encyclopedia articles (including the article images and facts) can be freely used under Attribution-ShareAlike license, unless stated otherwise. Cite this article:
Catweazle Facts for Kids. Kiddle Encyclopedia.