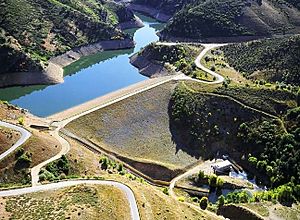 Causey is located in steep, forested, valley terrain, and extends into three canyons.

The reservoir is operated by the Weber Basin Water Conservancy District.

Causey Dam was constructed between 1962 and 1966 by the Bureau of Reclamation to provide water to the northern Wasatch front area of Utah. It is an earthfill dam.

Activities at Causey Reservoir include boating and fishing. There are no dedicated boat-launch facilities, and only wake-less speeds are allowed. Fishing includes Kokanee Salmon and several trout varieties, including rainbow, cutthroat, and brown. Causey is also one of the few places in Utah where spearfishing is allowed. (Note: Always check Utah Fishing regulations because they change from year to year)

Swimming and cliff-jumping are also popular.

Camping and picnic sites are available at nearby Memorial Park, and along the Ogden River.

Camp Kiesel, a Boy Scout camp, is located on the northern arm of the reservoir.

All content from Kiddle encyclopedia articles (including the article images and facts) can be freely used under Attribution-ShareAlike license, unless stated otherwise. Cite this article:
Causey Reservoir Facts for Kids. Kiddle Encyclopedia.