Ceanothus arboreus, with the common names feltleaf ceanothus, island ceanothus, and island mountain lilac, is a species of Ceanothus shrub in California.

It is found on slopes in coastal sage scrub and chaparral habitats.

Ceanothus arboreus is a spreading bush growing up to 12–36 feet (3.7–11.0 m) in height. It has large, glossy, dark green leaves which are leathery or felt-like on their undersides.

Its showy bright blue flowers grow in plentiful panicles, or bunches, of tiny five-lobed blossoms. Some varieties and cultivars have light, powder blue blooms, and others bear darker blue flowers. The bloom period is February to April.

The fruits are three-lobed, triangular capsules. 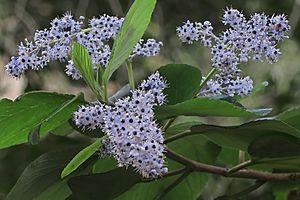 'Ceanothus arboreus is cultivated as an ornamental plant for use in drought tolerant and wildlife gardens and natural landscaping projects. Butterflies like the flowers and the quail eat the seeds.

Numerous cultivars have been selected for garden use, including:

All content from Kiddle encyclopedia articles (including the article images and facts) can be freely used under Attribution-ShareAlike license, unless stated otherwise. Cite this article:
Ceanothus arboreus Facts for Kids. Kiddle Encyclopedia.