Cedar Bough Place Historic District is a national historic district located at New Albany, Indiana, ¾ of a mile from the Ohio River, across from Louisville, Kentucky. It consists of the 800-block of the road Cedar Bough Place, between Beeler and Ekin Avenues.

Twenty-five primary buildings, seven outbuildings, and one fence contribute to the historic nature of the neighborhood, all of which built from 1883 to 1920. These buildings are primarily of Vernacular Victorian and Queen Anne style, but examples of Bungalow, Airplane Bungalow and American Foursquare are also in the district. Most houses in the district were built between 1891 and 1905.

When Lot 42 of the Illinois Land Grant was divided, Cedar Bough Place was laid off into lots, roads, etc. and sold on the 17th day of September, 1836 by Margaret Loughrey with the following provision: "and I hereby certify all roads, alleys, streets, etc., laid off of said ground to be for the common benefit of the purchasers and owners of said lots. The streets and alleys cannot be opened to the public without 90% of the property owners voting for the street being dedicated as a public street."

Private streets were created as a way for residential landowners to control real estate speculation and maintain property standards, in an era before the protections of zoning. 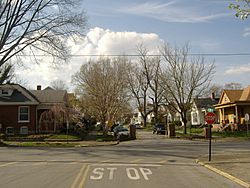 Construction in the neighborhood was started by Andros Huncilman 50 years later in 1890, at the end of the prosperous post-Civil War era in New Albany's history. Huncilman owned a 5-acre (20,000 m2) lot that would comprise the district. Throughout its history it has been a private street; with ownership of the street divided among the property owners.

A long-standing fence that contributes to the historic nature of the neighborhood is on the north side, and is a central wrought iron connecting two original stone walls keeping traffic from entering the private road. The southern fence is just wide enough for a single vehicle. Built in 1970 to replace the original entrance, it is not part of the historic fabric of the district.

All content from Kiddle encyclopedia articles (including the article images and facts) can be freely used under Attribution-ShareAlike license, unless stated otherwise. Cite this article:
Cedar Bough Place Historic District Facts for Kids. Kiddle Encyclopedia.