Stagecoach Inn is a two-story log building that was built around 1820. The building has a gabled, standing-seal metal roof. The porch along the original facade has been enclosed. This building has been altered. Its log walls are covered with shiplap siding. It is believed to have been a stop on a stagecoach line.

The Frazier-Pressley House is a three-story, stuccoed brick building. It is believed that it was built for Captain James W. Frazier in 1852 to 1856. The house has three octagonal elements joined with a connecting hallway. There is a two-story, brick extension to the rear. The facade has four three-story brick columns. The house has five brick chimneys. It originally had a widow's walk on the top of the central octagon. The house has eleven major rooms. Each of the floors of each octagon is a single room. The plan of the house is believed to be unique in the United States. 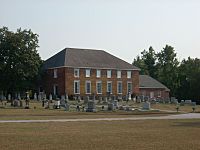 Cedar Springs ARP Church is a rectangular, brick church with hip roof. The brickwork is common bond with bonding every sixth course. The foundation is stone. This church was built circa 1853 to replace an earlier framed church. A single story, brick wing was added in the 1940s to the rear of the church. The church cemetery is adjacent to the church.

All content from Kiddle encyclopedia articles (including the article images and facts) can be freely used under Attribution-ShareAlike license, unless stated otherwise. Cite this article:
Cedar Springs Historic District Facts for Kids. Kiddle Encyclopedia.