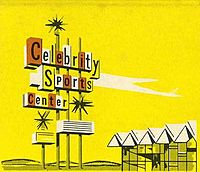 An early promotional illustration of the signature Celebrity Sports Center building and sign.

There are some sources that suggest Walt Disney Company used the business as a training facility for its employees prior to deployment to Disney World.

Walt Disney and the original investors built the Celebrity's complex at a cost of $6 million. The bowling lanes opened first in 1960 and the rest of the center opened in 1961.

In 1979, a group of private investors led by Bob Leavitt and Neil Griffin purchased Celebrity's for $1.9 million. The three signature water slides that were visible from outside of the building were added after Leavitt/Griffin purchase.

In the early 1990s, Celebrity's was losing money and apparently in need of significant maintenance. In 1994, the complex was sold to Acquisition Corporation of the Rockies for $10.8 million, a subsidiary of Trammell Crow Company. The new owner demolished Celebrity's by March 1995. Today the 7.1-acre (29,000 m2) site is a Home Depot store and retail space.

Celebrity's was home to 80 bowling lanes, more than 300 video games and pinball machines spread across three arcades, a 50-meter pool with three water slides, a billiard room, a full-service restaurant, the "Hofbräu" bar, bumper-car rides and a shooting gallery which were located in the "Fun Center" game room downstairs, the largest of the 3 arcade rooms, where there were ticketed games such as Skee ball or Boom ball to play for prizes . There were also 3 complete slot car tracks in the basement. 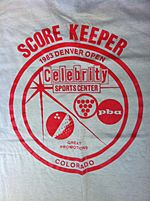 In the spring of 1991, the Celebrity Sports Center played host to the $125,000 Celebrity Denver Open for the Professional Bowlers Association Tour from May 21 to May 25. The final round of the tournament was televised live on ESPN. Left-hander John Mazza would go into the TV Finals with a 299 pin lead over the 2nd place qualifier Parker Bohn III. Curtis Odom qualified 3rd, Bryan Goebel 4th, and Mike Shady would take the 5th and final seed. The opening match saw Mike Shady squeak out a narrow victory over 4th seed Bryan Goebel with a score of 184-173. He followed up that victory with a 212-199 win over Curtis Odom, but he would fall to Parker Bohn III in the 3rd match of the show 226-204. In the championship match, Parker Bohn III was simply unable to find a consistent line to the pocket to score. As a result, he was defeated easily by the number 1 seed John Mazza, who threw 10 out of 12 possible strikes in a lopsided 269-190 victory to win the first place prize of $18,000.

CSC still evokes fond memories from many metropolitan Denver natives. The Denver Post called Celebrity Sports Center a "huge indoor funland," a landmark "uniquely Denver," and noted its demolition left a "void...that cannot be filled." Some tributes to CSC can still be found online. One such tribute even notes that CSC souvenirs and paraphernalia continue to appear on auction websites from time to time, and seem to sell for high prices.

Patrons often remember the iconic sign that stood outside Celebrity's. At least one of the 14-point stars from the sign has been preserved. Today it is used as a winter holiday decoration at the Lumber Baron Inn & Gardens in Denver.

Additionally, the old bowling lanes at Celebrity's were preserved. Those lanes were reused during the restoration of the 19th-century Oxford Hotel in downtown Denver and now serve as the hotel's ballroom floor.

Early plans for the redevelopment of the site included a brass plaque to be "mounted somewhere on the new site to commemorate Celebrity's existence as the entertainment mecca that it was." The fate of this proposed plaque is unclear. ( Pre Home Depot the building was Builders Square which had an encased bowling pin from the CSC and plaque underneath it by the far left exit door. No longer at Home Depot. Fate of pin and plaque unknown.)

All content from Kiddle encyclopedia articles (including the article images and facts) can be freely used under Attribution-ShareAlike license, unless stated otherwise. Cite this article:
Celebrity Sports Center Facts for Kids. Kiddle Encyclopedia.