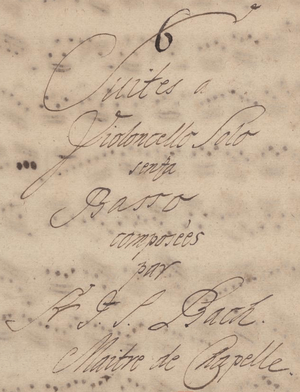 The Six suites for unaccompanied cello by Johann Sebastian Bach are some of the most often performed and recognizable solo compositions ever written for cello. They were most likely composed during the period 1717–1723, when Bach served as a Kapellmeister in Köthen. The title of Anna Magdalena Bach's manuscript was Suites á Violoncello Solo senza Basso.

All content from Kiddle encyclopedia articles (including the article images and facts) can be freely used under Attribution-ShareAlike license, unless stated otherwise. Cite this article:
Cello Suites (Bach) Facts for Kids. Kiddle Encyclopedia.