Celtiberian Range (in Spanish language: Serranía Celtibérica), also called South Lapland or Spanish Lapland (Laponia del Sur or Laponia Española), is the geographical term given to a small part of Spain due to its lower population and lack of infrastructure.

Its nomenclature comes from the Celtiberians, a pre-Roman tribe who lived in this area long ago. 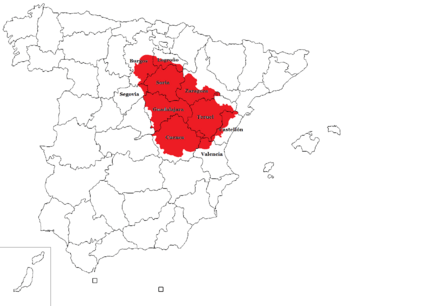 It comprises an area of 63,098 km². Through the range are 1,632 municipalities among several provinces. All but the Valencian Community are landlocked.

All content from Kiddle encyclopedia articles (including the article images and facts) can be freely used under Attribution-ShareAlike license, unless stated otherwise. Cite this article:
Celtiberian Range Facts for Kids. Kiddle Encyclopedia.