Central Grocery Co. is a small, old-fashioned Italian-American grocery store with a sandwich counter, located at 923 Decatur Street in the French Quarter of New Orleans, Louisiana. It was founded in 1906 by Salvatore Lupo, a Sicilian immigrant. He operated it until 1946 when he retired and his son-in-law Frank Tusa took over the operation. It is currently owned by Salvador T. Tusa, Salvatore's grandson, and two cousins, Frank Tusa and Larry Tusa. The store was one of many family-owned, neighborhood grocery stores during the early 20th century, when the French Quarter was still predominantly a residential area. Though tourists are more common in Central now, it has retained much of its old-world market feel. 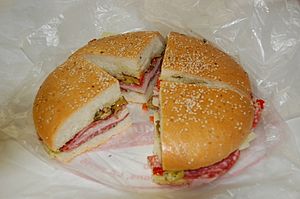 The Central sells not only the sandwiches as take-out or eat-in, but also the ingredients of the muffuletta—including olive salad by the jar—for people who want to make the sandwich at home. Because of the muffuletta, Central Grocery was featured on national television, in the PBS special program Sandwiches That You Will Like, and on NBC's The Today Show (five best sandwiches series).

All content from Kiddle encyclopedia articles (including the article images and facts) can be freely used under Attribution-ShareAlike license, unless stated otherwise. Cite this article:
Central Grocery Facts for Kids. Kiddle Encyclopedia.