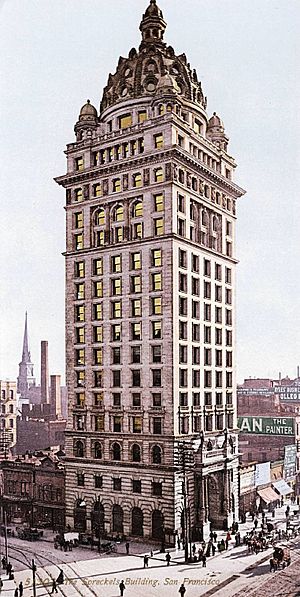 Central Tower is a 91 m (299 ft) 21-story office building at Market and Third Streets in San Francisco, California. The building has undergone numerous renovations since its completion in 1898 as the Call Building. It was later known as the Spreckels Building.

The San Francisco Call is to have the finest building ever erected for a newspaper office. It is to be built on the corner of Market and Third streets, of granite and white marble, and will be fifteen stories — 310 feet high, the highest building this side of Chicago. Unlike the Chronicle building it will be a beautiful building and a credit to its owner, Claus Spreckels, and worthy of the great paper to be printed within its walls. A light granite will be used for the first three stories, but above the third story white marble will be used. The main entrance or rotunda will be finished in some polished California marble, the very choicest obtainable, and the floor will be mosaic.

The building eventually stood 315 feet (96 m) tall with an ornate baroque dome—which housed the offices of Reid & Reid, the building's architects—and four corner cupolas when construction finished in 1898. It was the tallest building west of the Mississippi River for many years. The structure was badly burned and damaged by the 1906 San Francisco earthquake, although the building did not collapse.

After the fire, The Call reopened its offices at a new location, The Montgomery, and the former Call Building became known as the Spreckels Building. In 1938 Albert Roller completely refurbished Central Tower. The building's height was reduced to 298 feet (91 m) and the number of stories was increased from 15 to 21; the ornate dome and the cupolas atop the building were removed.

All content from Kiddle encyclopedia articles (including the article images and facts) can be freely used under Attribution-ShareAlike license, unless stated otherwise. Cite this article:
Central Tower (San Francisco) Facts for Kids. Kiddle Encyclopedia.