Centre Point is a building in Central London, comprising a 34-storey tower; a 9-storey block to the east including shops, offices, retail units and maisonettes; and a linking block between the two at first-floor level. It occupies 101–103 New Oxford Street and 5–24 St Giles High Street, WC1, with a frontage also to Charing Cross Road, close to St Giles Circus and almost directly above Tottenham Court Road tube station. The site was once occupied by a gallows, and the tower sits directly over the former route of St Giles High Street, which had to be re-routed for the construction.

The building was designed by George Marsh of the architects R. Seifert and Partners, with engineers Pell Frischmann, and was constructed by Wimpey Construction from 1963 to 1966 for £5.5 million. The precast segments were formed of fine concrete, utilising crushed Portland stone; they were made by Portcrete Limited at Portland, Isle of Portland, Dorset, and transported to London by lorry.

Centre Point was built as speculative office space by property tycoon Harry Hyams, who had leased the site at £18,500 a year for 150 years. Hyams intended that the whole building be occupied by a single tenant, and negotiated fiercely for its approval.

On completion, the building remained vacant for many years, leading to its being referred to as "London's Empty Skyscraper". With property prices rising and most business tenancies taken for set periods of 10 or 15 years, Hyams could afford to keep it empty and wait for his single tenant at the asking price of £1,250,000; he was challenged to allow tenants to rent single floors, but consistently refused. At that time skyscrapers were rare in London, and Centre Point's prominence led to its becoming a rallying symbol for opponents. The homeless charity Centrepoint was founded in 1969 as a homeless shelter in nearby Soho, named Centrepoint in response to the building Centre Point being seen as an "affront to the homeless" for being left empty to make money for the property developer.

In 1974 an umbrella group of Direct Action housing campaigners, including Jim Radford, Ron Bailey and Jack Dromey, organised a weekend occupation of Centre Point from 18 January to 20 January to draw attention to its being deliberately left empty during a housing crisis in London. (Two of the occupiers had obtained jobs with the Burns Security Company, which was guarding the building.)

From July 1980 to March 2014, Centre Point was the headquarters of the Confederation of British Industry (CBI) which became, at 33 years and seven months, the building's longest-standing tenant. 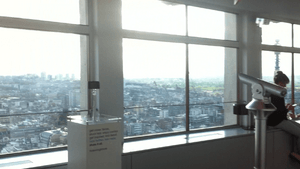 It has since been purchased by Almacantar. Almacantar approached Conran and Partners for the refurbishment of the tower including change of use from office to residential, whilst MICA, formerly Rick Mather Architects, lead the refurbishment of the lower rise buildings and the new affordable housing block. In 2015 work began on conversion of the building to residential flats. The restoration and conversion of the tower to a residential building was finished in March 2018. Much like at its original opening, the refurbished tower remains largely empty, with few windows lit in the evenings, the rest in darkness, despite at least half its units being sold. This has led to it being called one of London's "ghost towers" 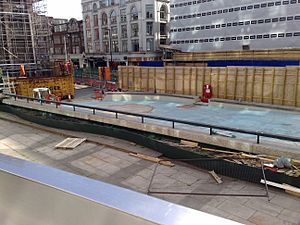 The Centre Point fountains have been removed as part of the demolition of the plaza for Crossrail.

The promised transport interchange and highways improvements were not delivered following the original plan. The pedestrian subway attracted anti-social activities. On 19 June 2006, the Commission for Architecture and the Built Environment pointed to the building as an example of bad design, where badly-designed pavements force pedestrians into the bus lane and account for the highest level of pedestrian injuries in Central London. With the planned redevelopment of Tottenham Court Road Underground Station, a framework has been adopted to redevelop the traffic island beneath Centre Point as an open space.

All content from Kiddle encyclopedia articles (including the article images and facts) can be freely used under Attribution-ShareAlike license, unless stated otherwise. Cite this article:
Centre Point Facts for Kids. Kiddle Encyclopedia.