Cerro Maravilla is Puerto Rico's fourth highest peak at 1,205 meters (3,953 ft). It is located on the northern edge Barrio Anón in Ponce, close to the border with the municipality Jayuya, and is part of the Cordillera Central (Central Mountain Range). It is known as El Cerro de los Mártires ("Mountain of the Martyrs") and characterized as the most infamous peak in Puerto Rico, due to the 1978 Cerro Maravilla murders which took place here. 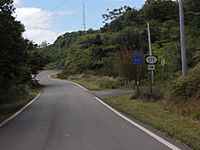 The height of the mountain makes for some interesting sights. For example, on clear days both the northern and southern coasts of the island can be appreciated simultaneously. In the winter season, the air is crisp and the temperature at night will usually fluctuate between the 40s and 60s degrees Fahrenheit. The chirping of the familiar "coquis" is prominent after nightfall.

The following table charts the climate at Cerro Marravilla throughout the year.

All content from Kiddle encyclopedia articles (including the article images and facts) can be freely used under Attribution-ShareAlike license, unless stated otherwise. Cite this article:
Cerro Maravilla Facts for Kids. Kiddle Encyclopedia.