The Chã das Calderas ("Plain of the calderas"), sometimes abbreviated Chã ("Plain"), is a caldera on the island of Fogo, Cape Verde. With a diameter of 9 km (6 mi) and open to the east, it is surrounded on the west by the bordeira, a mountainous wall which rises to 2,700 m (8,858 ft). It was made by the eruption of Monte Armarelo, which was replaced by the smaller Pico do Fogo. 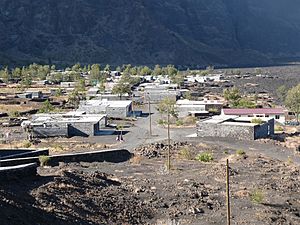 View of the town of Bangaeira.

The Chã das Caldeiras is in southwestern Cape Verde and occupies the north-east of the island of Fogo. It is shared between the municipalities of Mosteiros to the north and Santa Catarina do Fogo to the south.

A little more of a thousand people live permanently inside the caldera, in the small towns of Bangaeira and Portela; these towns are at about 1,700 m (5,577 ft), where sometimes the temperature gets to 0 °C (32 °F). Part of the National Park of Fogo, it is one of the main tourist destinations of Cape Verde. It is accessed by a single central road 35 km (22 mi) long from São Filipe.

Where land is not covered by lava, farmers grow fruit trees, grains and vineyards. A cooperative produces a local wine, the manecon, which is not send to other countries.

A school had 158 students in 2010. The village of Portela has two churches, one Catholic and one Adventist.

In 2012 there was no electricity in the villages of Bangaeira and Portela but the connection is expected in 2016.

All content from Kiddle encyclopedia articles (including the article images and facts) can be freely used under Attribution-ShareAlike license, unless stated otherwise. Cite this article:
Chã das Caldeiras Facts for Kids. Kiddle Encyclopedia.