Erysimum caboverdeanum is a plant species that belongs to the Brassicaceae family, the cabbage or mustard family. It is found only in the Fogo island, Cape Verde.

It was named for the first time by the French botanist Auguste Jean Baptiste Chevalier in 1935. Caboverdeanum (or the original caboverdeana) is a Latin word that means "Cape Verdean" or "from Cape Verde".

Chevalier named, in 1935, this species as Matthiola caboverdeana; this name now is a synonym because Sunding changed it to the present name, Erysimum caboverdeanum.

Erysimum caboverdeanum is a biennial small bush, up to 60 cm (24 in) high; its stems are woody and they stand upright. The narrow leaves are about 4 cm (1.6 in) long and 0.2 cm (0.08 in) wide and their margins are finely toothed.

The flowers, which are white or lilac coloured, are in groups (inflorescences) at the end of the stems. The fruits are very narrow and stand upright. 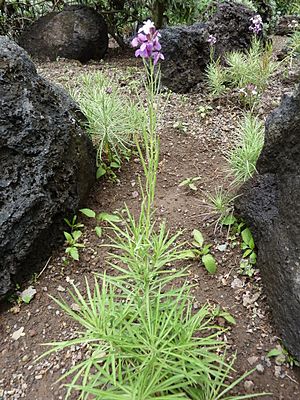 Erysimum caboverdeanum is an endemic species of the Cape Verdean island of Fogo on the volcano Pico do Fogo. It is common in soils with a recent volcanic origin at an altitude between 1,600 and 2,300 m (5,249 and 7,546 ft); it is found on the slopes of the volcano and in the Chã das Caldeiras, the plain in the volcanic crater.

The species is used for traditional medicinal purposes mainly as an infusion.

It is possible to use it as an ornamental plant, even in places like central Europe.

All content from Kiddle encyclopedia articles (including the article images and facts) can be freely used under Attribution-ShareAlike license, unless stated otherwise. Cite this article:
Erysimum caboverdeanum Facts for Kids. Kiddle Encyclopedia.