Echium vulcanorum is a plant species that belongs to the Boraginaceae family, the borage family. It is found only in the Fogo island, Cape Verde.

It was discovered and named by the French botanist Auguste Jean Baptiste Chevalier. He found the plant with flowers on July 1934.

It is locally known as lingua de vaca ("tongue of cow") because their leaves are rough. The same name is used for the other species of Echium that are found in Cape Verde: Echium hypertropicum and Echium stenosiphon.

It is a shrub with many branches, up to 1.5–2 m tall. The stems are covered with many hairs. The leaves are lanceolates (pointed at both ends) up to 10 cm long and 1.5 wide.

The flowers are in dense inflorescences (groups of flowers), almost conical, up to 18 cm long, with white flowers with blue stripes. 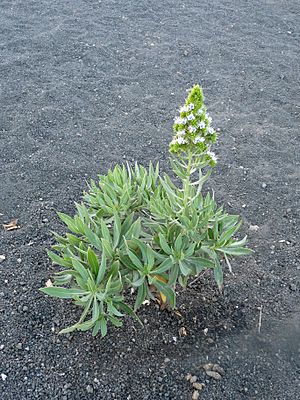 Echium vulcanorum is used for the production of firewood (dry wood that will be burned) and destroyed by goats, so this species, as well as the other two Echium species of Cape Verde, is seriously threatened, so that measures for its protection should be taken with urgency.

Some conservation actions have been done at the Bordeira region (in the Natural Park of Fogo Island) and now there is a population with a relatively high number of individuals.

All content from Kiddle encyclopedia articles (including the article images and facts) can be freely used under Attribution-ShareAlike license, unless stated otherwise. Cite this article:
Echium vulcanorum Facts for Kids. Kiddle Encyclopedia.