Chalmers is a town in Big Creek Township, White County, in the U.S. state of Indiana. The population was 508 at the 2010 census. 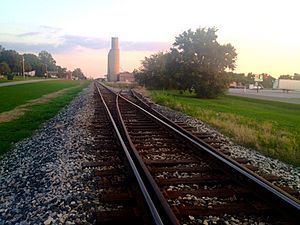 The history of Chalmers dates back to the early 1850s. Land was donated by Gardner Mudge to the Chicago, Indianapolis and Louisville Railway in 1854 after the company constructed a rail line through Big Creek in 1853. Mudge and his brother-in-law operated a general store. On April 21, 1854, a Post Office was established with Mudge serving as the postmaster.

Chalmers was platted on July 24, 1873; it included 103 lots on six streets. Several homes and stores were erected, and a school was constructed in the early 1870s. The first church was organized in 1878, and a tile factory was erected in the same year. The Bank of Chalmers was established by Jacob Raub in the early 1890s with a capital of $10,000. Chalmers became an incorporated town in 1892. "The Ledger" served as the first community newspaper, published initially in 1893. In 1895, a train station which later became a symbol of the town's history was constructed.

The village was originally known by many as "Mudge's Station," after Gardner Mudge. The name "Chalmers" was listed on railroad timetables of New Albany and Salem as early as 1856. By 1912, Chalmers had approximately 600 residents. It consisted of two grain elevators, a factory, fifteen stores, two banks, two livery barns, three blacksmith shops, a lumber yard, two hotels, two garages, and dozens of homes.
Although the depot was demolished in 1976, the railroad which passes through Chalmers is still in use today and is operated by CSX Transportation.
An archive of the town's history is actively maintained by the Chalmers Historical Society.

There were 203 households, of which 33.5% had children under the age of 18 living with them, 53.7% were married couples living together, 10.3% had a female householder with no husband present, 3.4% had a male householder with no wife present, and 32.5% were non-families. 28.6% of all households were made up of individuals, and 13.8% had someone living alone who was 65 years of age or older. The average household size was 2.50 and the average family size was 3.07.

Chalmers is a small community known to have cheerful hospitality.

For years, an annual festival known as Chalmers Community Day has occurred each summer. It includes a pancake breakfast and a pork dinner, hosted by the volunteer fire department. A car show often takes place at the Downtown square and a motorcycle show at Chalmers Community Park. Many residents conduct garage sales and yard sales at their homes during this event, giving it the nickname "Garage Sale Day." Outsiders, many of which reside in the surrounding towns and cities, visit the town to attend this annual event.

A large fraction of Meadow Lake Wind Farm, one of the largest onshore wind farms in the world, is located just west of Chalmers. The first turbine in the farm was constructed northwest of Chalmers and was visible from the north edge of the town. Today, the turbines can be spotted from within the town. The wind farm attracts tourists and has sparked a trend of turbine appearances in local art and photography. Following the construction of wind turbines near I-65, the traffic of the Chalmers Interstate exit increased substantially. Plans have been made for a tourism center near that Interstate exit. In addition to cultural impact, the wind farm has affected the local economy due to the farmland leasing involved with turbine placement.

A group of locals has expressed interest in the history of Chalmers, much of which seems to be missing. As a result, a committee of residents organized the Chalmers Historical Society which aims to recover and collect historical documents such as photos, yearbooks, newspapers, films, and artifacts. Volunteers also record audio interviews with current and former long-term residents of the town.

This Chalmers Historical Society hopes to soon operate a small museum which would showcase the physical and digital media collected by the committee. As of 2016, a former insurance agency office at 114 E. Main St. in Downtown Chalmers is being renovated for this purpose. Once completed, committee members and other volunteers will supervise the facility and allow public browsing on weekends and during special occasions.

The society and its museum are financed solely by benefactors. Most of the collection is recovered through donation as well. 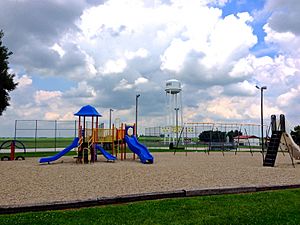 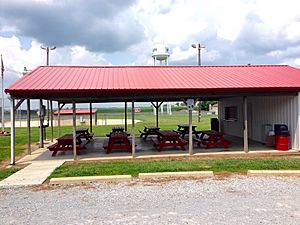 A pavilion at Chalmers Community Park

In the town is an outdoor complex called Chalmers Community Park, which features several recreational points of interest. It is a common location for seasonal sports competitions and everyday outdoor activities. The park is located on an alley with parking space.

The park has a pavilion shelter, which includes a concession stand, charcoal grills, trash cans, picnic tables, and a drinking fountain. The pavilion can be rented for special occasions such as birthday parties and reunions. Electrical outlets are provided. A small building west of the playground contains restrooms. 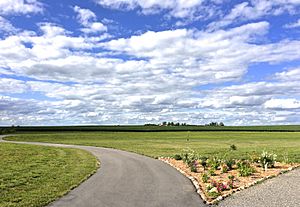 In the park is a network of connected walking trails. Overall, the walking park consists of 3,500 feet of trail. Originally chip seal, the trails were recently resurfaced with recycled asphalt from Indiana State Road 43. The park allows pets and encourages dog walking on these trails. Along the trails are several rest areas which include benches, trash cans, and community-planted flowers. From the trails, one can see to the horizon over the surrounding farmland.

The complex is maintained by a community management board. Park board meetings occur each month at the Chalmers Town Hall and are regularly open to the public.

The park board plans to make considerable improvements to Chalmers Community Park. The currently separate restrooms will be converted to unisex. The park's signs will be replaced. Lighting will be installed throughout the walking trails, allowing residents to utilize the park after dusk. Hundreds of new trees and shrubs are planned for purchase to be planted throughout the trails. Additionally, residents who adopt garden plots in the trails will be recognized by plaques. At least one new shelter will be constructed on the opposite side of the park as the current pavilion. Additional restroom facilities will be installed in the shelters. New basketball and volleyball courts will be installed.

There is a community basketball court on Walnut Street east of the town hall and fire station. The court is lighted during dark hours.

In September 2013, the Chalmers Civic Club announced its intention to transform a vacant lot in Downtown Chalmers into a small outdoor park area. The lot is located immediately east of the post office. The new park was to provide a reading and lounging area with covered seating. It would also significantly improve the ambience of Downtown. The Civic Club hopes that it will spark other cosmetic improvements in the area as well.

By November, the lot was cleared and the post office wall was primed for a future mural. New sidewalks and other cement work was installed, and decorative stone was laid. The following spring, the project resumed. A custom gazebo was constructed on the cement platform in the center of the lot, providing covered seating. Trash cans and flower boxes were also placed.

In 2013, the Civic Club approached the Art Club at Frontier Jr./Sr. High School about incorporating local student art into the project. They also hoped that this would spark youthful interest in community betterment. The Art Club volunteered to paint a mural on the exterior of the post office. The mural, now complete, is modeled on a black-and-white photograph of the Chalmers depot with an approaching steam locomotive. The date of the photograph is unknown. Atop the mural is the text, "Mudge's Station," a historical name for the town. In 2015, the Art Club began working on a second mural which paints a vision of Chalmers's vibrant past. It is modeled on a color photograph of Downtown Chalmers in its prime with many active storefronts. Beneath the photograph, the mural reads, "Building a better Community," which reflects the mission of the Civic Club.

Future plans for the Downtown park include mounting five plaques on the cement wall in honor of the men and women who have served in the military. A potential location for another mural is the Chalmers Historical Museum directly to the east of the park. 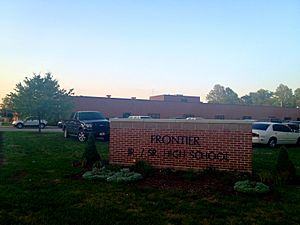 The Discovering H.A.N.D.S. Preschool is a nonprofit ministry of the local Chalmers Community Church. It operates out of the church facility. H.A.N.D.S. stands for "Hearts and Attitudes are Nurtured while Discovering the Savior."

Frontier School Corporation, a public school system, is headquartered in Downtown Chalmers. Most Chalmers students are enrolled in this district. Its single secondary school, Frontier Jr./Sr. High School, was formed to replace the former Chalmers High School as well as the schools in Brookston. Elementary-level children attend the primary school of the same corporation in Brookston, Frontier Elementary School. For the 2012-2013 school year, Frontier was honored as a grade "A" school corporation by the Indiana Department of Education.

All content from Kiddle encyclopedia articles (including the article images and facts) can be freely used under Attribution-ShareAlike license, unless stated otherwise. Cite this article:
Chalmers, Indiana Facts for Kids. Kiddle Encyclopedia.