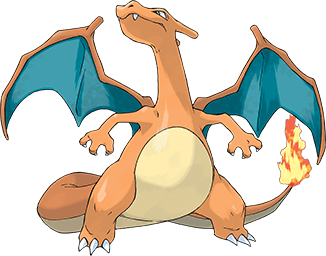 Charizard (known as Lizardon in Japan) is a character of the Pokémon anime and video game series. Ash, one of the main characters in the series, owns a Charizard. Known as the Flame Pokémon, Charizards are violent yet honorable creatures, flying proudly around the sky and always looking for powerful enemies to fight with. Charizard is also the version mascot of Pokémon Red and FireRed versions, and makes an appearance on the boxarts of many other Pokémon games. During an interview, Pokémon Company president Tsunekazu Ishihara said that they knew Charizard would be popular with North Americans, because they like strong, powerful characters.

Charizards are orange dragon-like Pokémon that have two wings, that are blue on the front, and orange on the back. Its belly and soles are cream-colored, while their eyes are light blue. The video games say that Charizard's wings can bring it to 4,600 feet in the sky. They can breath very hot flames that can melt anything, although it will never torch a weaker enemy. Charizard also crush their enemies with its claws. Charizard are violent yet honorable creatures, flying proudly around the sky and always looking for powerful enemies to fight with. If a Charizard is angry, the flame at the tip of its tail can be a whitish-blue color. Because of their crazy behavior, Charizard are also known to cause wildfires by accident.

All content from Kiddle encyclopedia articles (including the article images and facts) can be freely used under Attribution-ShareAlike license, unless stated otherwise. Cite this article:
Charizard Facts for Kids. Kiddle Encyclopedia.