Ash Ketchum (サトシ Satoshi in Japanese) is the main character of the Pokémon anime. His first Pokémon was Pikachu, which he has kept since the beginning of the series.

Named after his and Pokémon series creator Satoshi Tajiri, Satoshi was designed by Ken Sugimori and Atsuko Nishida, and was meant to represent Tajiri as a child. He has a character similar to him in the games, known as Red, who first appeared as the player-controlled protagonist (main character) in Pokémon Red and Blue. He is a Pokémon Trainer whose goal is to capture and train creatures called Pokémon, and use the creatures' special abilities to fight other Pokémon, or use them for new ways to explore the game's world, such as instant travel between two areas. An animated version of the games later followed, with Satoshi voiced by Rica Matsumoto and was redesigned by Sayuri Ichishi.

When they were changing the show so it was easier for North Americans to understand, the character's name was changed in the anime to "Ash Ketchum", the first name taken from one of the possible names players could choose for the character in the games, and the last name tying into 4Kids early catchphrase for the series, "Gotta catch 'em all!"

Tajiri said in an interview that, between Japanese and American reactions to the series, Japanese customers focused on Pikachu, while Americans bought more items featuring Ash and Pikachu together. He said that he felt the character represented (showed) what the franchise meant, the human nature, was necessary. Ash was given a rival, Shigeru. In an interview, Tajiri said the difference between the character's relationship in the games and anime; while in the games, trainers Red and Blue were enemies, in the anime, Shigeru represented Satoshi's mentor. When asked if in either case Satoshi would beat his rival, Tajiri replied "No! Never!" However, Ash has outdone Gary as a trainer in the anime, and Gary has since become a Pokémon researcher like his grandfather, Professor Oak. 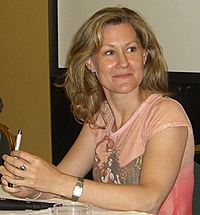 Veronica Taylor was the voice of Ash in seasons 1–8.

Ash's character design was first managed by Sayuri Ichishi, replaced by Toshiya Yamada during the Diamond and Pearl story line.

Veronica Taylor did the voice of Ash in seasons one through eight of the English version of the Pokémon anime. After the script was translated from Japanese, the lines were changed to fit the movements of the character's mouth (called lip flap). All the voices were recorded separately so Taylor was the only one there when she said her lines, which took about six to eight hours. Taylor was often the first person to record so she had to imagine how the previous line will be said. "Luckily, I work with a great director who helps with the interpretation of the line, matching of the lip flap, and consistency of the voice." Taylor enjoyed playing Ash because of his "low, husky (scratchy, deep) voice" also well as "energy and excitement".

Taylor said that Ash and the other characters "loosened up" after the first ten episodes of the anime; she believed the writers were more relaxed and felt the pressure of making sure everything was done correctly. Taylor commented: "I enjoy playing [Ash] now much more than I did in the very beginning because I can have fun with him more, and we kind of know him and can work out how he really would react. We have the classic Ash responses and things like that." Sarah Natochenny replaced Taylor in season nine when Pokémon International took over the dubbing rights (replacing and re-recording voices). In Japan, Rica Matsumoto is the voice of Ash.

Red, the silent protagonist of Pokémon Red, Blue, and Yellow and its remakes, Pokémon FireRed and LeafGreen, has many names, one of which is "Red". Some others are "Ash" (later used for anime character Ash Ketchum) and "Jack". In the game, Red is a young (most people think about 10 years old) boy from Pallet Town. His adventure begins one day when Professor Oak calls the two of them to his lab and gives them each a chance to choose their Pokémon. After getting their Pokémon, Blue challenges Red to a battle. Later, Professor Oak calls both Red and Blue and gives them both a Pokédex each, and sends them on a journey to achieve his dream of capturing every type of Pokémon.

In the beginning, ten-year-old Ash is starting out as a beginner Pokémon trainer in Pallet Town, his hometown. After getting Pikachu as a starter Pokémon from Professor Oak, Ash left Pallet Town to start his journey. Since he left, Ash has traveled the world of Pokémon, competed in many challenges, and caught many Pokémon. He currently travels with Iris and Cilan in Unova.

Ash has improved a lot as a trainer as the series went by. However, he is still excited and strong-willed. During the first season of the series, Ash trained to catch more Pokémon than his childhood rival (person who you compete against), Gary Oak, although Gary was always shown to be the stronger trainer. He soon began to focus more on each of his Pokémon's abilities. Ash's primary enemy is a group of antagonists named Team Rocket. Ever since the second episode, "Pokémon Emergency!", two Team Rocket agents named Jessie and James, along with a talking Meowth, have tried to steal Ash's partner, Pikachu, as well as many others, but have always failed. While they fight a lot, they sometimes work together against a common enemy, like in Pokémon: The Movie 2000, where they help Ash in finding the three treasures in order to save the world.

The descriptions of Ash in the manga The Electric Tale of Pikachu, Pocket Monster Zensho, and Ash & Pikachu, are much like in the anime. There are key differences in the manga, though. In The Electric Tale of Pikachu, it is based on Ash's journey up until the end of the Orange Islands travel. Ash is usually seen traveling by himself during this manga, although he is sometimes joined by Misty and Brock in Indigo. Misty is the only one to join Ash in the Orange Islands. At the end of the series, The Ash & Pikachu manga is similar, although it has the episodes from the anime like "The Fortune Hunters" and "A Goldenrod Opportunity" combined, but with a few changes. In Pocket Monsters Zensho, Satoshi (as Ash is known in Japanese) starts with Charmander instead of Pikachu. The manga ends at the Indigo Plateau, where Satoshi beats the Elite Four. Manga author Toshihiro Ono said that Ash was one of his favorite characters to draw for the series, saying "I want to go on a trip with Misty just like him! (And forget about job, rent, etc.)".

In the Pokémon Adventures manga, Red is a Pokémon trainer and the main character of the first stories. Red starts off in Pallet Town, eager to be a trainer, and gets a Bulbasaur (who later evolves all the way into a Venusaur) and a Pokédex from Professor Oak. He also has a Poliwhirl which he has known since childhood that evolves into a Poliwrath, and uses these two Pokémon on his adventure. He later captures a troublesome Pikachu, and, after working to gain it's trust, it becomes one of Red's top three Pokémon. Antagonists include his rival, Oak’s grandson Blue, who was given Charmander; Green, another Pokémon trainer from Pallet Town, who stole a Squirtle from Professor Oak; and Team Rocket, a group whose goal was to take over the world through Pokémon. 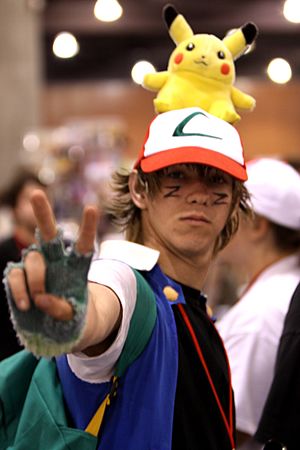 A person wearing Ash's iconic original series attire. Due to its recognizability and good reception, it is a popular cosplay look.

All content from Kiddle encyclopedia articles (including the article images and facts) can be freely used under Attribution-ShareAlike license, unless stated otherwise. Cite this article:
Ash Ketchum Facts for Kids. Kiddle Encyclopedia.