Charles du Maine (1414–1472) was a French prince of blood and an advisor to Charles VII of France, his brother-in-law, during the Hundred Years' War. He was the third son of Louis II, Duke of Anjou and King of Naples, and Yolande of Aragon.

In 1434, he married Cobella Ruffo (d. 1442), Countess of Montalto and Corigliano. They had one son, named Jean Louis Marin, who died as an infant.

In 1437, he took up arms on behalf of King Charles VII of France, participating in the capture of Montereau, and that of Pontoise, in 1441. At this time, his brother, René of Anjou, ceded to him the County of Maine. He continued to take part in King Charles' campaigns.

By his second marriage, in 1443, to Isabelle of Luxembourg (d. 1472), daughter of Peter I of Luxembourg, Count of Saint-Pol, he had two children:

A dispute over the county of Guise between Charles and Isabelle's brother, Louis of Luxembourg, Count of Saint-Pol, was settled by settling it upon Isabelle as a dowry.

He led the rearguard for King Louis XI of France at the Battle of Montlhéry in 1465. 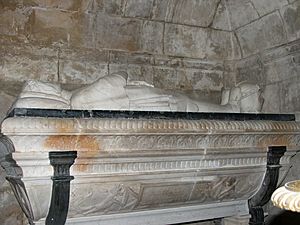 Tomb of Charles, Count of Maine

All content from Kiddle encyclopedia articles (including the article images and facts) can be freely used under Attribution-ShareAlike license, unless stated otherwise. Cite this article:
Charles, Count of Maine Facts for Kids. Kiddle Encyclopedia.