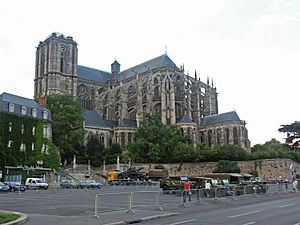 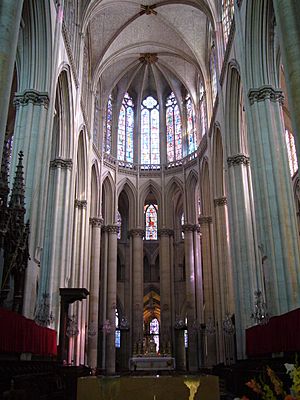 Interior of the choir

The Cathedral of Le Mans is a cathedral built in the Gothic style in the town of Le Mans, France. It is dedicated to Saint Julien; he was the first bishop of Le Mans; he is also buried in the cathedral. It is somewhat unusual in the West. It is often compared to those of Reims and Chartres. Its building was influenced a lot by the cathedral of Bourges. It is also special because its nave is built in Romanesque style, but the choir is built in Gothic style.

All content from Kiddle encyclopedia articles (including the article images and facts) can be freely used under Attribution-ShareAlike license, unless stated otherwise. Cite this article:
Le Mans Cathedral Facts for Kids. Kiddle Encyclopedia.