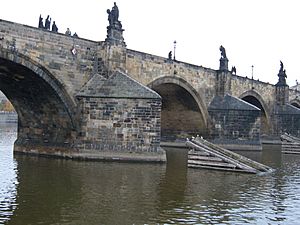 Charles Bridge is the oldest stone bridge in Europe. It had been constructed from 1357 to 1400. Until 1841, this was the only bridge to connect old street of Prague. It also played an very important role as the trade route between East and West zone of Prague. At first, it was called just "Stone Bridge" or "Praha Bridge." But it had the name of "Charles Bridge" since 1870.

There has been legend in this bridge. If a person touches the statue of Sanctus Loannes Nepomucenus saying the hope, the hope will come true. This is because Nepomucenus was the confessor of the queen of Bohemia. But one day king wanted to know what the queen confessed. This was because the king had a doubt that the queen had an affair with another man. However, Nepomucenus did not tell anything to king and resisted to the bitter end. So the king made Nepomucenus fall in the river. So Nepomucenus got drowned. However, He was respected as the Saint right after his death.

All content from Kiddle encyclopedia articles (including the article images and facts) can be freely used under Attribution-ShareAlike license, unless stated otherwise. Cite this article:
Charles Bridge Facts for Kids. Kiddle Encyclopedia.