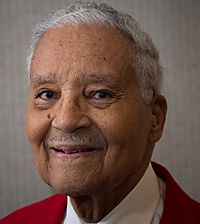 Charles E. McGee (born December 7, 1919) is a retired African-American fighter pilot. He was one of the Tuskegee Airmen and a career officer in the United States Air Force for 30 years who flew a total of 409 combat missions in World War II, Korea and Vietnam. McGee was born in Cleveland, Ohio.

All content from Kiddle encyclopedia articles (including the article images and facts) can be freely used under Attribution-ShareAlike license, unless stated otherwise. Cite this article:
Charles E. McGee Facts for Kids. Kiddle Encyclopedia.