Charles Emerson Beecher (9 October 1856 – 14 February 1904) was an American paleontologist most famous for the thorough excavation, preparation and study of trilobite ventral anatomy from specimens collected at Beecher's Trilobite Bed. Beecher was rapidly promoted at Yale Peabody Museum, eventually rising to head that institution.

"Quiet, unassuming, modest in a very marked degree, simple, without affectation, entirely free from all eccentricities, conscientious and painstaking in every thing he had to do. In the words of Professor Chittenden, Director of the Sheffield Scientific School '. . . . to those who knew Professor Beecher intimately no words of appreciation will be deemed too extravagant, for close association only brought more clearly to view the many mental traits that testified to the strength of character and of mind that helped to make Professor Beecher one of the strong men of the Scientific School.' "

A born naturalist and collector, Beecher began collecting fossils from the Chemung and Waverly Formations about Warren, resulting in an extensive collection of fossil Phyllocarids and freshwater Unionids presented to the New York State Museum in Albany in 1886 and 1887. 20,000 specimens (40,000 if duplicates are included), largely collected by Beecher himself, were present, including at least 121 species of land and fresh-water Mollusca. 102 localities are represented, seventy of which are in New York State, the others being in various parts of the United States, especially Warren, Pennsylvania and Michigan.

"...a collection of fine selected material it stands an excellent proof of Beecher's indefatigable industry and appreciation of what a collection should be, much of it, it should be remembered, gathered when he was a youth, or even a child."

Beecher received an undergraduate degree (B.S.) from University of Michigan in 1878.

Following graduation, Beecher worked for 10 years as personal assistant to the difficult, but highly influential James Hall (who also counted Fielding Meek, Charles Walcott and Josiah Whitney among his assistants) the State Geologist of New York. Working with Hall provided a strong background in systematic paleontology and allowed Beecher to further improve his fossil preparation and photography skills. Beecher is credited in many of Hall's publications for his fossil preparation, photographic and systematic contributions.

In 1888, at the request of then Curator of the Geological Collections Othniel Charles Marsh, Beecher moved to New Haven, Connecticut, to oversee the Yale Peabody Museum's growing collection of invertebrate fossils. In 1891 he was Instructor for Paleontology at Sheffield Scientific School (SSS) and took the geology course for James Dwight Dana, who was ill.

Beecher was awarded his doctorate for his study on Brachiospongidae (enigmatic Silurian sponges) in 1891. In 1892 Beecher renewed his working relationship with Charles Schuchert (who had also worked with Hall) preparing slabs of Crawfordsville crinoids for the 'Chicago Exposition'. Remarkable preparations of brachiopods, trilobites, Crawfordsville crinoids and Uintacrinus specimens for exhibition at Yale Peabody Museum were especially noteworthy and pay tribute to Beecher's exceptional skills as a fossil preparator.

Beecher was first to thoroughly excavate a thin deposit of shale that now bears his name; Beecher's Trilobite Bed. Exceptional preservation (by pyrite) of soft body parts at Beecher's Trilobite Bed is geologically rare and was later recognized as a highly significant paleontological site, a Konservat-Lagerstätten. In 1893 Beecher began the publication of his brilliant papers on the structure, development and classification of trilobites, his preparatory skill and patience worked out the structure of antennae, legs and other ventral appendages; previously impossible on any known material.

Beecher's bachelor days at New Haven (where he roomed in "the attic," the top story of the SSS with Louis Valentine Pirsson, Samuel Lewis Penfield & Horace Lemuel Wells) came to an end on September 12, 1894, when he married Miss Mary Salome Galligan.

Beecher was a leading proponent of Neo-Lamarckism (epitomized by Edward Drinker Cope and Alpheus Hyatt) and also argued for orthogenesis and racial senescence.

"...[Beecher] became the leader of the Hyatt School. Beecher's reputation as an investigator will rest chiefly on the rich results he obtained in the critical, painstaking application of these fruitful principles that Professor Hyatt labored so long to establish."

Beecher's promotion path at Yale was rapid. Promoted to Professor of Historical Geology at SSS in 1897 and, on the death of Marsh in 1899, Beecher succeeded him as Curator of the Geological Collections, Yale Peabody Museum. Beecher's title at SSS was later renamed University Professor of Paleontology.

In June 1899, Beecher gave his large personal collection to the Peabody Museum. Representing 20 years of work, the 100,000+ specimens were all self collected. Mostly Devonian and Lower Carboniferous material from New York and Pennsylvania, the donated collection contained about 500 type specimens and also contained hundreds of specimens representing developmental stages, rare species, and exquisitely prepared examples showing structural detail. All specimens were meticulously labeled, named and provenanced. 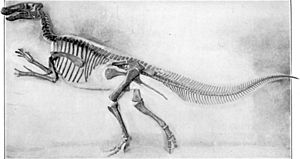 At the same time as the donation, Beecher was made head of the museum following Marsh's death, and was put to mount specimens. The first one he chose was YPM VP 2182, a well-complete and articulate hadrosaur dinosaur identified then as Claosaurus annectans but now understood to be Edmontosaurus, originally found by John Bell Hatcher. The mount serves the first of many things, such as the first nearly complete dinosaur mounted in the US, and the first mounted dinosaur to have its spine horizontal to the ground, rather than be upright and tail-dragging.

Beecher died suddenly of heart disease on February 14, 1904 leaving many of his studies unfinished. Beecher was survived by his wife, two young daughters, mother and brother. Beecher was succeeded by his close friend and colleague Charles Schuchert as Curator of the Geological Collections.

"His studies... made our knowledge of the Trilobita as a class a new thing, putting them on a basis for proper comparative study with other Crustacea. He also took up studies of the development of Trilobita, describing the development in genera in which it was previously unknown or partially known."

Although Beecher is most noted for his seminal work on trilobites he is also regarded for his work on corals and was ultimately regarded as a leading authority on fossil crustacea and brachiopoda and noted for contributions in evolution.

"It is not too much to say that a careful study of Beecher's papers on brachiopods, and the same may be said of his trilobites, will give the student a more comprehensive view of the class than any other published source."

Yale reprinted a collection of some of Beecher's most important papers, Studies in Evolution, as part of their bicentennial in 1901, although a modest Beecher deplored as extravagance the republication of papers already in print. Beecher's bibliography includes some 100+ scientific papers, often brief, describing 7 new orders, 1 new family, 2 new subfamilies, 7 new genera, and 20 new species. An apparently low content of stratigraphic and systematic paleontology publications in his body of work should be offset by his contribution to the work of Hall.

Obituaries published in some of the leading academic journals of the time attest to his professional impact: American Journal of Science; American Geologist; Science; Museum's Journal [London]; Geological Magazine [London]; and American Naturalist. A comprehensive re-examination of exceptionally preserved trilobites published in 1920 was dedicated to Beecher; his contribution was still significant nearly 20 years after his death.

All content from Kiddle encyclopedia articles (including the article images and facts) can be freely used under Attribution-ShareAlike license, unless stated otherwise. Cite this article:
Charles Emerson Beecher Facts for Kids. Kiddle Encyclopedia.