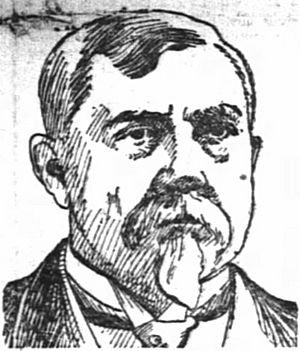 Born in Tippecanoe County, Indiana, Doxey moved with his mother to Minnesota in 1855 and worked on a farm. Later moved to Fairbury, Illinois, where he attended the public schools. He moved to Anderson, Indiana. He entered the service as first sergeant of Company A, Nineteenth Regiment, Indiana Volunteer Infantry, in July 1861. He was promoted to second lieutenant, subsequently resigned, and then became captain of Company K, Sixteenth Indiana Infantry. He engaged in the manufacture of staves and headings. He served as member of the Indiana State Senate in 1876. He served as member of the board of directors in the first natural-gas companies of Anderson.

Doxey was elected as a Republican to the Forty-seventh Congress to fill the vacancy caused by the death of Godlove S. Orth and served from January 17 to March 3, 1883. He was an unsuccessful candidate for election in 1884 to the Forty-ninth Congress. He resumed former business activities. He died in Anderson, Indiana, April 30, 1898. He was interred in Maplewood Cemetery.

All content from Kiddle encyclopedia articles (including the article images and facts) can be freely used under Attribution-ShareAlike license, unless stated otherwise. Cite this article:
Charles T. Doxey Facts for Kids. Kiddle Encyclopedia.