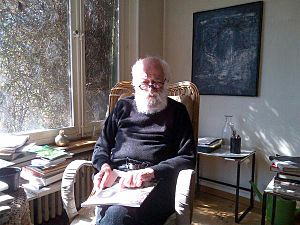 Charles Wyrsch (July 5, 1920 – June 16, 2019) was a Swiss contemporary artist and painter. He was born in Buochs, Nidwalden. Wyrsch's artistic career was based on the expressive of figurative paintings, which he gave up in favor of abstraction for about ten years, to return to the figurative. Wyrsch died on June 16, 2019 at the age of 98.

All content from Kiddle encyclopedia articles (including the article images and facts) can be freely used under Attribution-ShareAlike license, unless stated otherwise. Cite this article:
Charles Wyrsch Facts for Kids. Kiddle Encyclopedia.