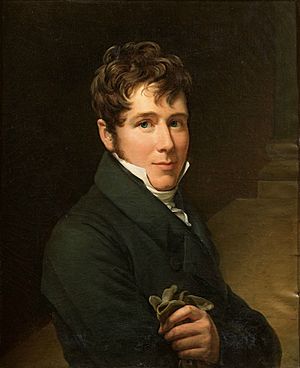 Charles was born on 7 March 1793 at Sunninghill in Berkshire. His parents, Marc Étienne de Beauvau, Prince of Beauvau and Nathalie de Rochechouart, were in exile in England from the French revolution.

The family returned to France. In 1810, Charles entered the French Army during the Napoleonic Wars. He became an officer of carabiniers two years later, during the campaign against Russia. He was nominated senator. He was elected Councillor-General of the Meurthe in 1854.

All content from Kiddle encyclopedia articles (including the article images and facts) can be freely used under Attribution-ShareAlike license, unless stated otherwise. Cite this article:
Charles de Beauvau, Prince of Beauvau Facts for Kids. Kiddle Encyclopedia.