Charlie and Lola facts for kids 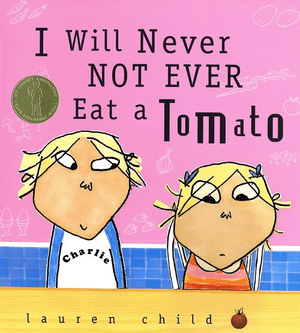 The first book, I Will Never NOT EVER Eat a Tomato (US title, later printing with Greenaway Medal seal, 2000)

Charlie and Lola are fictional children created by the English writer and illustrator Lauren Child in 2000. They were introduced in a series of picture books and later adapted as animated television characters. Lola is an energetic, imaginative little girl; Charlie is her kind and patient older brother who is always willing to help Lola learn and grow.

The first "Charlie and Lola" book was I Will Never Not Ever Eat a Tomato, published by Orchard Books in 2000. The U.S. edition was published in the same year by Candlewick Press, with the title: I Will Never NOT EVER Eat a Tomato. Charlie and Lola's parents, as well as their friends' parents, are often mentioned, but never seen. For that first book in the series, Child won the 2000 Kate Greenaway All-Medal Trophy from the Library Association, recognising the year's best children's book illustration by a British subject. For the 50th anniversary of the Medal (1955–2005) it was named one of the top ten winning works, selected by a 2007 panel to compose the ballot for a public election of the all-time favourite.

The series was made into an animated TV show.

Characters of Charlie and Lola

Charlie is the imaginative and helpful brother of Lola. He is 7 years old and has platinum blonde hair like Lola. Charlie is often asked to look after Lola, and he sometimes has to think of creative ways to keep her busy. In both the TV series and the books, he breaks the fourth wall by talking about Lola to the viewers/readers.

Lola is an imaginative and quirky 5-year-old girl. Lola is the younger sister of Charlie and is best friends with Lotta. She is described by her brother Charlie as "small and very funny". She likes playing and is full of character. She normally wears blue butterfly hairclips and has short blonde hair. She is often a drama queen. She also has an imaginary friend named Soren Lorenson.

Lotta is Lola's best friend. After meeting at school they became friends quickly and spend a lot of time together. Lotta usually follows Lola's lead, and is in awe of Lola's brother Charlie, his friend Marv, and Sizzles the dog. She has black curly hair.

Soren Lorenson is Lola's imaginary friend, rendered as monochrome and translucent. When Lola and Soren Lorenson are playing, he is rather detailed (has the look of a real person only grey and translucent). When someone interrupts them (such as Charlie), he still has detail but becomes more unknown.

Marty is Marv's older brother. He doesn't like to discard anything. Marty does not seem to like people in his room. His voice is heard in Look After Your Planet. He exclaims "Get out of my room, now! Played by Charlie Avery

Minnie Reader is a classmate and friends with the girls including Lola and Lotta and is very clever. She likes tap dancing, beads, ponies, patterns, colouring and knows a lot about guinea pigs and has one named Fluffy. She is serious and doesn't smile as much as the rest of the characters. She has short brown hair with two green circle shaped hairclips in it. She is usually seen with a teal sweater dress, orange and pink socks and black shoes but, sometimes she is seen with a brown coat and the same shoes. She has appeared on several episodes like "Look After Your Planet", "How Many More Minutes Are There Until Christmas"etc. She said she was going to be a Wicked Witch in "What Can I Wear For Halloween" but she is considering a nice rabbit instead of a witch. She had violet-rimmed glasses with orange flowers on it on "I Really Absolutely Must Have Glasses" Sometimes she is seen with Evie. Sometimes not. For unknown reasons, her name is never revealed.

Morten is Marv's younger brother and a friend of Lola's. He is quite shy but once he starts to play he's a lot of fun.

Arnold is Lola's neighbour. Arnold is only featured in some episodes. In one episode, Arnold drops Lola's ice-cream. But he makes it up to her by letting her use his paddling pool.

Granny and Grandpa are Charlie and Lola's grandparents. Granny paints for a hobby, while it appears that Grandpa is good with horses. Like all other adult characters, they are referred to but are never seen.

Like the other adults in the show, Charlie and Lola's parents are mentioned but never seen, nor do they say anything.

Evie is a ruddy girl in Lola and Lotta's class. She has red hair which she wears in pigtails. She also wears a skirt, a long sleeve shirt and striped tights.

Jack is Marv's cousin. Lola and Lotta thought he was Marv's new best friend in the episode, "But Marv is Absolutely Charlie's Best Friend"

A Japanese girl who has the same hair clips just like Lola, a cardigan and a skirt with two long bunches.

Squeak - Marv's white mouse. He can jump from one leg to another.

Bert - Lola's class guinea pig. Despite the name, Bert is a girl. At first, Charlie and Lola thought Bert was a boy, until she had a litter of baby guinea pigs.

Tickles - Charlie and Lola's second mouse. He can easily tickle anyone, hence the name.

Bat Cat - A character from one of Charlie and Lola's favourite comics. He is a grey/black cat that goes about doing heroic deeds.

Pirate Squidbones - Charlie and Marv's favourite cartoon, Pirate Squidbones tells of the adventures of a notorious one-eyed pirate and his motley crew. The villain in this TV show is the kraken. Aparetiet in How Many More Minutes?.

The Tooth Fairy - A fairy who takes teeth and leaves money. In the episode How Many More Minutes?". She teams up with Charlie and Lola to stop the evil pirates.

Smiley children - A girl and a boy who has shiny clean teeth. They always smile. They later are kidnapped by the evil pirates.

Foxie - Lola's stuffed fox. It is her favourite toy. In the episode "What If I Get Lost In The Middle Of Nowhere?", after a long search for her lost toy, she later comes to find out that she simply left it under her pillow.

Ellie - Lola's toy elephant. Ellie is a china elephant with nice pink flowery designs all over it.

Frog - Lola's springy frog that she keeps on her bed stand. Apparently, this is also Søren Lorenson's favourite toy; he plays with it when Lola's not around.

The Rocket - A class project of Charlie's making, the rocket is a model space rocket that won Charlie a First Place prize in school; he beat Marv and another boy named Harvey. Unfortunately, Lola in her curiosity had a bit of a mishap with it and broke the rocket. But Charlie, notwithstanding his crossness, was able to mend it like new.

Daisy - Lola's rag doll, she is a blonde doll wearing a pink dress and a bow to match in its hair. She has blue buttons for eyes.

Molly the Rabbit - An anthropomorphic female stuffed rabbit who's all pink with a red bow on its head. She is one of Lola's stuffed animals.

Mr. Teddy - Charlie's former teddy bear from when he was Lola's age. He is yellow with green buttons for eyes and a blue bow tie. He now belongs to Lola.

The books have been adapted by Tiger Aspect into a cartoon series, using a collage style of animation which accurately captures the style of the original books. Directed by Kitty Taylor and Claudia Lloyd. 2D cel animation, paper cutout, fabric design, real textures, photomontage, and archive footage are all employed and subsequently animated in a software application called CelAction. The cartoons are also notable for their use of children's voices, rather than adult voice actors, a technique pioneered by the Peanuts television specials.

The first series of 26 episodes (11 minutes each) was first broadcast on 7 November 2005. The second series of 26 episodes (again, 11 minutes each) started broadcasting on CBeebies on 2 October 2006 (with the morning broadcast also being shown on BBC Two) a third series followed. In the television series, Charlie is seven and Lola is four, and goes to school (her teacher is called Mrs. Hansen). In episodes of both the first and second series, Charlie celebrates his birthday (in "It's a Secret..." and "This Is Actually My Party"), although this doesn't seem to affect his age in other episodes. The third series, a final 26-episode run, was broadcast in the UK and the US in the 2007-2008 television season. With two special episodes broadcast in 2006 and 2007, a total of 80 episodes were produced.

Charlie and Lola's Best Bestest Play was first performed at Polka Theatre on 26 April 2008 and has subsequently been performed at the venue again in 2010 and 2012. It will be staged for the first time at Glow, the events and exhibition space at Bluewater in Kent, by Watershed Productions over the Christmas period of 2013.

Charlie and Lola's Best Bestest Play is based on the characters created by Lauren Child and adapted by Jonathan Lloyd, Artistic Director of Polka Theatre.

The Charlie and Lola Album

Charlie and Lola's Favourite and Best Music Record was released on 19 March 2007, aimed at parents as well as children. The music is largely a development of existing interstitial and theme music taken from series 1 and 2. There are elements of easy listening, lounge, big band jazz, reggae, bluegrass, eastern European, sci-fi, Latin, classical and film music. There are 17 tracks plus one hidden track, with the programme's theme tune opening and closing the album.

Each track includes spoken word extracts from the series. In many cases, these are manipulated to fit with the musical accompaniment.

"The Bestest in the Barn" was released as a single on 12 March 2007. It features Lola and Lotta teaching various animals on their farm how to sing, dance and play music. This is the only track on the album which does not appear in any episode. Lola and Lotta do however appear as farmers in "I Do Not Ever Never Want My Wobbly Tooth To Fall Out". They also have a tendency to imagine that animals are capable of developing impressive human skills, as seen in "We Do Promise Honestly We Can Look After Your Dog" and "I Will Not Ever Never Forget You Nibbles". "The Bestest in the Barn" now features on a playlist of CBeebies programme music played throughout CBeebies Land at the Alton Towers Resort.

The album is a collaboration between various composers and musicians who write and perform for the TV series. Much of the music is programmed but many tracks feature performances by musicians from London-based bands – Menlo Park, Polar Bear and Acoustic Ladyland.

All other tracks written by John Greswell and produced by Greswell / Taylor for MPM London Ltd.

All content from Kiddle encyclopedia articles (including the article images and facts) can be freely used under Attribution-ShareAlike license, unless stated otherwise. Cite this article:
Charlie and Lola Facts for Kids. Kiddle Encyclopedia.