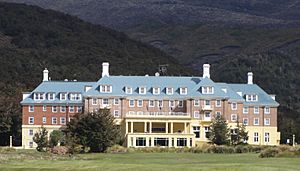 Chateau Tongariro, also known as the Grand Chateau, is a New Zealand hotel and resort complex, located close to Whakapapa skifield on the slopes of Mount Ruapehu, It is close to the volcanic peaks of Mount Tongariro and Mount Ngauruhoe, within the boundaries of Tongariro National Park, New Zealand's oldest. The building was completed in 1929 and, despite extensive refurbishment, still retains much of the style of the pre-Depression era.

In 1887 the Paramount Chief of Ngati Tūwharetoa, Horonuku Te Heu Heu Tūkino gifted the tribe's land – including the sacred mountain peaks of Ruapehu, Ngauruhoe and Tongariro – to the people of New Zealand. The gifting was to ensure the area's protection for all time, for all people.

In the early 20th century, the approach to Whakapapa was only for the fit and strong. There were miles upon miles of wild country to cross on foot or horseback, wild rivers to ford and mountainous terrain to navigate. Climbers Bill Mead and Bernard Drake imported the first skis seen in the North Island in 1913, and in July of that year were the first to attempt to ski on Mount Ruapehu. They realised the Whakapapa Valley was "much better than any other area of Ruapehu for skiing as well as for summer parties, if it could only be given road access and huts." In 1919 Bill Mead persuaded the Department of Tourist and Health Resorts to pay for an access road to Whakapapa. The new 'highway' was pushed through towards Mt Ruapehu with the help of labour from the Whakapapa prison camp early in 1925 under the supervision of Dave Dunlop, and in 1925 Sir James Gunson drove the first car to Whakapapa. The Ruapehu Ski Club built a collection of huts which became Whakapapa Village. 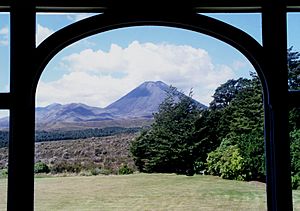 Ngauruhoe from the blue sofa in the sitting area (" Mount Doom ")

In 1923, the newly-established Tongariro National Park Board investigated a site for a 100-bed hostel in order to encourage tourists to visit the newly formed Park, but it wasn't until 1925 that New Zealand Government, via the National Park Board, followed up this initiative by offering to lease land and lend up to £40,000 to any private company which would build and operate a hotel on the site.

Rodolph Lysaght Wigley (1881–1946), the managing director of the Mount Cook Tourist Company, took up the option. He formed the Tongariro Park Tourist Company with a vision to build what was at the time known as The Chateau, alongside the original Whakapapa ski huts, on a land lease of 63 acres. To raise capital for the undertaking the company was floated on the sharemarket, where it was poorly subscribed. The company signed a lease with the government on 9 November 1928, a condition of which was that the building had to be erected by 31 March 1930 (barely 17 months away) and that it "cost not less than £40,000 or more than £60,000". Despite only £30,000 of shares being taken up, Wigley let a contact in late 1928 to Fletcher Construction Company, which also involved Fletchers buying 15,000 of shares in the Tongariro Park Tourist Company.

The Chateau was designed by Timaru-based Herbert Hall (1880–1939), architect to the Mount Cook Tourist Company, who modelled his design on the Canadian Resort of Lake Louise. Influenced by the hotels built by the Canadian Pacific Railway such as the Château Frontenac, he designed a neo-Georgian structure of four stories and basement. The style of the building was not European, despite its name, but American Colonial Revival, a variant of the Georgian Revival style popular between the wars. It is possibly the only building in New Zealand made of reinforced concrete but designed to resemble a traditional Georgian brick building.

The foundation stone was laid on 10 January 1929. Fletchers used a workforce of 120 carpenters and labourers, offering an incentive of free accommodation and a free suit to workers who stayed until the completion of the project. Most of the labourers were recruited from the Waikune Prison, which was the closest neighbour to the construction site. The building was open for guests by 1 August 1929, even though it was still unfurnished. It was officially opened on 13 November 1929 with Fletcher Construction still owed £28,000. 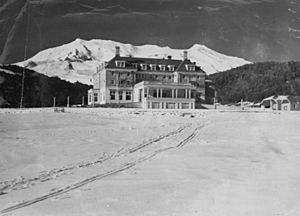 The hotel was lavishly appointed, with panoramic window views, hot and cold running water in every room, and custom-made high-quality furniture. Most of the staff were recruited from overseas. The innovative heating system used enormous boiling-water tanks in the basement and pumped hot water up five storeys; originally coal or oil heated, it was switched to electricity and still operates today. The total cost was £88,000 (well over the contract price) of which the hotel had cost £78,000, while at the request of the Tourist Company another £10,000 had been spent building extra wooden buildings, a garage and a golf course in the front of the hotel. The golf course was designed by an architect serving a prison sentence and built by prison labour. Wigley had led Fletchers to believe that if they overspent the company would be reimbursed by the Mount Cook Tourist Company. Unfortunately due to the Depression it was in difficulties and so would not pay for the increased expenditure. James Fletcher, the head of the company, approached the Prime Minister Sir Joseph Ward and asked him to increase the government loan to £60,000. Ward agreed and Fletcher obtained a promise from Wigley that the bulk of this injection of money would go to pay Fletchers. The Tongariro Park Tourist Company was by now in serious financial trouble, which was not helped by spending lavishly fitting out the hotel. Wigley reneged on the deal and passed on only £10,000. The onset of the depression delayed hopes of a tourism boom; to secure their debt Fletchers put the Tongariro Park Tourist Company into receivership in February 1931, took control of the hotel, and ran it for 3 months before walking away with a loss of £19,000, (which included £1000 of losses incurred during their period of ownership). 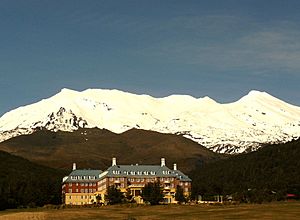 In 1932 the hotel was taken over by the National Park Board, who quickly transferred the title to the Department of Tourist and Health Resorts, which owned and ran the hotel for the next 26 years. Over this period, the hotel manager not only ran the Chateau, but also Tongariro National Park. The sole park ranger, Alf Cowling, was told "his services were to be at the disposal of the Manager of The Chateau, and that his horse was to be available when not otherwise required for hiring out to guests."

The numbers of skiing tourists declined during World War II, so in 1942 the Chateau was commandeered by the Health Department as an asylum when the Wairarapa earthquakes damaged Porirua Psychiatric Institution in Wellington. In late 1945 Ruapehu erupted over a ten month period, and the heavy showers of ash disrupted the Chateau's power and water supply; the patients were evacuated to Auckland. The Chateau then served as a rest and recuperation centre for Air Force personnel returning from service in World War II.

After the War was a boom time for Whakapapa skifield, with the installation of ski-tows, chair lifts, and new facilities. In August 1948, newly renovated, Chateau Tongariro reopened to provide accommodation for increasing numbers of visitors. In 1957, control of the hotel passed to the newly-created Tourist Hotel Corporation (THC) of New Zealand, which also developed the Whakapapa skifield. The hotel rooms were gradually upgraded and reduced in number from 90 to 64, but the profitability of the Chateau declined. 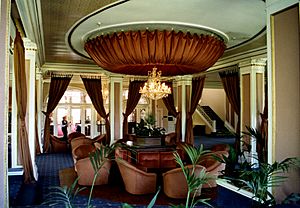 In 1990, during a period of Government privatisation of assets, the Chateau was sold to KAH New Zealand Limited, a subsidiary of Oriental Holdings Berhad (OHB), a Malaysian-based conglomerate owned by the Loh family with hotel and restaurant holdings in Singapore and Malaysia. The new owners invested NZ$3 million in refurbishing the complex and renamed it The Grand Chateau (although it is still widely referred to as Chateau Tongariro); the ski area was sold to a separate company. In 2005 a new five-storey wing costing NZ$6 million and containing 40 rooms and replicating the style of the original building was opened. To avoid disturbing guests the expansion used a Scandinavian system of modular construction with the rooms built in Auckland and trucked to the site where they were installed using a crane. The Chateau is currently operated by Bayview International Hotels and Resorts, which is also a subsidiary of Oriental Holdings Berhad (OHB).

After the 2008 Global Financial Crisis, skiing holidays dropped off, and KAH New Zealand posted losses for four straight years, totalling $1.9 million, before making a profit again in 2016. In 2020, in response to the loss of overseas tourists from the coronavirus epidemic, the Chateau offered discounted ($70 a night) rooms and had over 3500 bookings over May and June, normally quiet months. Tourism New Zealand raised the possibility of resorts like Chateau Tongariro being purchased by the Government, as was done in 1932, but this was rejected.

Ski clubs on the Whakapapa ski fields above the Chateau

Power to the complex was initially provided by a coal fired furnace which heated water which was then circulated around the complex to provide heating and 100 kW hydro power station in the Whakapapanui Stream which provided power for lighting and cooking.

By the early 1950s the existing power supplies at the complex were becoming inadequate. In June 1952 the Ministry of Works requested the King Country Electric Power Board to provide a 500 to 600 kW power supply to the Chateau. This resulted in an 8.5-mile long overhead 11 kV transmission line being constructed and commissioned in 1955. This not only supplied power to the chateau but also to the Whakapapa ski field and to several mountain huts on Mount Ruapehu. In the early 1960s a second line was constructed and commissioned in 1964 by the King Country Electric Power Board to improve the reliability of supply to the Chateau and to other customers in the area.

All content from Kiddle encyclopedia articles (including the article images and facts) can be freely used under Attribution-ShareAlike license, unless stated otherwise. Cite this article:
Chateau Tongariro Facts for Kids. Kiddle Encyclopedia.