Chelsea is a town in Rogers County, Oklahoma, United States. The population was 1,964 at the 2010 census, a decline of 8.3 percent from the figure of 2,136 recorded in 2000. Chelsea was named after the area in London, England, by Charles Peach, a railroad official who was a native of London. The town was the site of the Chelsea-Alluwe Oil Field, which produced a significant amount of oil from circa 1910 until the early 1920s, before it played out.

In 1881, Chelsea began as a stop on the Atlantic and Pacific Railroad. A post office was established in November 1882. The community incorporated as a town in the Cherokee Nation, Indian Territory, in 1889. The town was surveyed and platted in 1902. The Bank of Chelsea, the first state bank in Indian Territory, began operation in March 1896.

The town economy has historically rested on farming, ranching and oil production. Important farm products were oats, corn, wheat and pecans. Chelsea became noted as a shipping point for cattle and hay before statehood in 1907. The Chelsea-Alluwe oil field was discovered southwest of Chelsea in 1889 by the United States Oil and Gas Company.

There were 835 households, out of which 35.2% had children under the age of 18 living with them, 45.4% were married couples living together, 14.4% had a female householder with no husband present, and 35.4% were non-families. 32.0% of all households were made up of individuals, and 16.2% had someone living alone who was 65 years of age or older. The average household size was 2.51 and the average family size was 3.19. 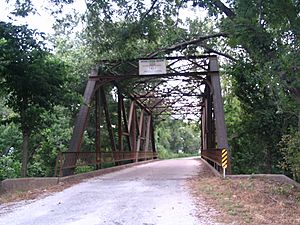 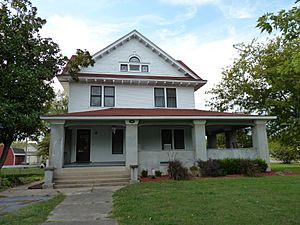 The following sites in Chelsea are listed on the National Register of Historic Places:

All content from Kiddle encyclopedia articles (including the article images and facts) can be freely used under Attribution-ShareAlike license, unless stated otherwise. Cite this article:
Chelsea, Oklahoma Facts for Kids. Kiddle Encyclopedia.