Kids Encyclopedia Facts
This page is about the neighborhood in Denver, Colorado. For other uses, see Cherry Creek (disambiguation).

Cherry Creek is a neighborhood in Denver, Colorado, USA. It has many newer residences mixed in with some of Denver's older homes.

The neighborhood is located near the geographic center of the City and County of Denver and is a mixture of dense urban development and tree lined residential streets. It is bounded by the Cherry Creek on the south, East Sixth Avenue to the north, University Boulevard and Colorado Boulevard on the west and east, respectively. The neighborhood takes its name from the nearby Cherry Creek running along the south side of the neighborhood. 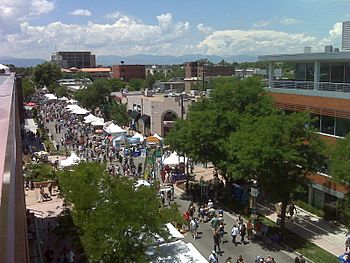 All content from Kiddle encyclopedia articles (including the article images and facts) can be freely used under Attribution-ShareAlike license, unless stated otherwise. Cite this article:
Cherry Creek, Denver Facts for Kids. Kiddle Encyclopedia.