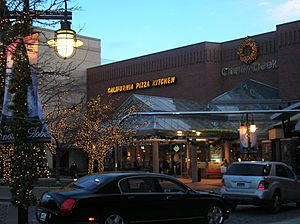 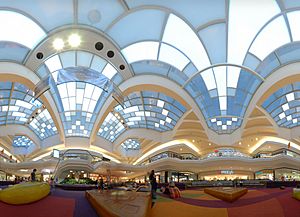 Cherry Creek Shopping Center, also known as Cherry Creek Center, is a shopping mall about three and half miles southeast of downtown Denver, Colorado in the Cherry Creek Neighborhood. It is situated along East First Avenue on the banks of Cherry Creek.

Cherry Creek Center was originally completed in 1953, and was renovated in 1990, currently anchored by three department stores; Neiman Marcus, Macy's, and Nordstrom. Lord & Taylor opened a location at the mall in 1990, a newer expanded store closed in 2004 citing a weak and competitive regional marketplace. Other than the shops in Aspen, Cherry Creek Center is the exclusive location of several luxury retailers in Colorado. Saks Fifth Avenue closed in March 2011 and became Restoration Hardware in 2015. The mall is home to many international brands like Louis Vuitton, Burberry, and Brooks Brothers.

It is also home to an eight screen movie theater operated by AMC. The mall is operated by the Taubman Centers company.

Before the shopping center

The shopping center is a triumph of mined land reclamation. Before the shopping center, sand was mined from a large pit. After it was mined out, the city used the pit as a sanitary landfill in the 1940s. After the pit was filled with trash, the first Cherry Creek shopping center was built atop the dump. (Matthew J. Sheridan (1970) Urbanization and its Impact on the Mineral Aggregate Industry in the Denver, Colo., Area, US Bureau of Mines, Information Circular 8320) It was designed in 1949 by Temple Hoyne Buell and is still in use, located immediately west of the larger mall facility extension renovated in 1990. The current location of Bed, Bath and Beyond was originally the Cherry Creek location of The Denver Dry Goods Company/May-Daniels & Fisher until 1990.

All content from Kiddle encyclopedia articles (including the article images and facts) can be freely used under Attribution-ShareAlike license, unless stated otherwise. Cite this article:
Cherry Creek Shopping Center Facts for Kids. Kiddle Encyclopedia.