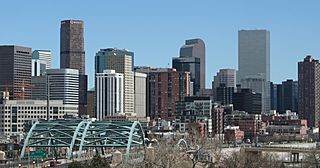 Downtown Denver is the main financial, commercial, and entertainment district in Denver, Colorado. There is over 23,000,000 sq ft (2,100,000 m2) of office space in downtown Denver, with 130,000 workers. The downtown area can be divided into six or seven main districts: Union Station, LoDo (however, Union Station is often considered to be part of LoDo), Ball Park, Central Downtown, Civic Center, Upper Downtown, and Arapahoe Square. Within those districts are many smaller features, districts and squares. Some of the more popular features include the 16th Street pedestrian mall, built in 1982, Larimer Square, the re-emerging Theatre District near Curtis and 14th, and Civic Center Park. Surrounding neighborhoods include Capitol Hill and Uptown to the east, Highland to the west, Five Points to the north, and the Golden Triangle to the south.

As of 2008, there are 34 buildings in the downtown area reaching over 300 ft. This count does not include the recently completed One Lincoln Park (380 ft) or the Spire (478 ft) and the Four Seasons (565 ft) both under construction. See the List of tallest buildings in Denver.

Downtown Denver also houses a smaller Federal District consisting of four blocks around Champa, Stout, 19th and 20th streets. This district contains a federal courthouse, the Byron G. Rogers Federal Building, a U.S. Court of Appeals, and a US Customs House. Not a part of this district is the Denver Mint, which actually lies behind the City and County Building at Civic Park.

The Downtown Denver Partnership helped lead the lobbying effort to pass an ordinance that provided the police with a law enforcement tool to move the homeless out of sight of tourists and residents of downtown Denver. Support for the "Urban Camping" Ban included hotelier Walter Isenberg, Vice Chair of a Downtown Denver Partnership board and major donor to Denver's Road Home, the city agency on homelessness. The ban, now Sec. 38-86.2. of the Denver Municipal Code, passed on May 14, 2012 and supersedes Sec. 38-86.1. which provided the homeless a safe sanctuary in downtown Denver between the hours of 9:00 p.m. and 7:00 a.m. Sponsored by Mayor Michael Hancock and Councilman Albus Brooks, the ban was approved by a vote of 9 to 4 by the Denver City Council. A number of organizations are opposing the ban criminalizing homelessness including Colorado Coalition for the Homeless, Denver Catholic Worker, Denver Homeless Out Loud, Downtown Denver and Occupy Denver. Denver Homeless Out Loud compiled a report on the impact of the "Urban Camping" Ban after surveying 512 homeless people.

All content from Kiddle encyclopedia articles (including the article images and facts) can be freely used under Attribution-ShareAlike license, unless stated otherwise. Cite this article:
Downtown Denver Facts for Kids. Kiddle Encyclopedia.