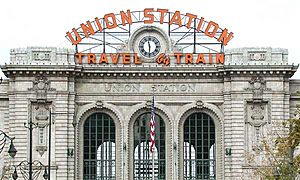 LoDo, Denver is the lower downtown area of Denver, Colorado, the oldest and original settlement of the city of Denver. It is a mixed-use historic district, known for its nightlife, and serves as an example of success in urban reinvestment and revitalization. The current population is approximately 21,145.

Prior to European exploration of the area, Native Americans, particularly the Arapaho tribe, established encampments along the South Platte River near or in what is now LoDo. In 1858, after the discovery of gold in the river, General William Larimer founded Denver by putting down cottonwood logs in the center of a square mile plot that would eventually be the current LoDo neighborhood, making LoDo both the original city of Denver, as well as its oldest neighborhood. Then, like now, LoDo was a bustling and sometimes wild area known for its saloons. During the Sand Creek Massacre, it was LoDo where the heads of the slaughtered Arapaho tribe were paraded in victory.

As Denver grew, city leaders realized a railroad was needed to keep Denver a strong city, especially when the transcontinental railroad bypassed Denver for Cheyenne, Wyoming. In 1870, after much cajoling from town leaders, residents passed bonds that brought a 106-mile (171 km) rail spur from Cheyenne. This and later train lines ended up in the Central Platte Valley, adjacent to LoDo. Union Station became the place most people traveled into the city and LoDo would be the first part of the city they would see. This section eventually became Denver's Chinatown from the 1870s to the 1880s, only to be torn down by race riots.

By the mid-twentieth century, what was once a thriving business area had become a skid row. As highways and airports diminished the dominance of passenger railroad transportation, the importance of Union Station, LoDo's most prominent building, waned. 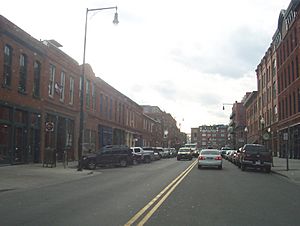 The Lower Downtown Historic District, known as LoDo, was created by the enactment of a zoning ordinance by Denver City Council in March 1988. The resolution's intent was to encourage historic preservation and to promote economic and social vitality in Denver's founding neighborhood at a time when it still held significant historic and architectural value.

During this time, the neighborhood began its renaissance. New businesses opened, such as Wynkoop Brewery, developed by future Denver mayor and Colorado governor John Hickenlooper. Gradually LoDo became a destination neighborhood. By the time Coors Field opened on the edge of the LoDo Historic District in 1995, the area had revitalized itself, becoming a new, hip neighborhood filled with clubs, restaurants, art galleries, boutiques, bars, and other businesses. Pepsi Center, located on the other edge of the neighborhood, opened in 2000 and further established the neighborhood as a sport fan's paradise. New residential development came to LoDo, transforming old warehouses into pricey new lofts. 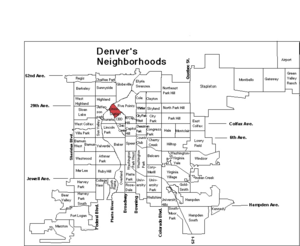 The LoDo neighborhood, near Denver's Union Station, highlighted on this map of Denver neighborhoods.

The B-7 zoned historic district is roughly bordered by:

When referring to the greater LoDo area, people often include adjacent neighborhoods that are not a part of the official historic district, but encompass LoDo's sphere of influence. This unofficial greater area includes Larimer Square, the Auraria Campus, Riverfront Park, the Central Platte Valley, the Prospect district, River North, and the Ballpark neighborhoods.

LoDo is located in north central Denver, directly northwest of the downtown CBD, near the confluence of Cherry Creek and the South Platte River.

The Oxford Hotel, built in 1891, is listed on the National Register of Historic Places. The Cruise Room is a hotel bar with historic art deco interior, that was operated as an illicit speakeasy.

The Wynkoop Brewing Company, a brewpub founded in 1988 by Colorado's 42nd Governor John Hickenlooper with partners Russell Schehrer, Mark Schiffler, and Jerry Williams, sponsors the "Beerdrinker of the Year" competition, which is hosted yearly in one of the banquet halls. The Wynkoop has a large billiards hall on its top floor.

In the summer of 2006, LoDo hosted the cast members of MTV's popular reality show The Real World, as season 18: The Real World: Denver. Several movies have also been filmed, wholly or in part, in the neighborhood, including the Eddie Murphy film Nowhereland (2006). LoDo's combination of contemporary architecture sprinkled among historic buildings, beautiful mountain views, access to Cherry Creek and nearby parks, plus its proximity to two major sporting venues, make it an attractive location for television and movie filming.

The LoDo District, Inc., a non-profit neighborhood and business association, represents both the residential and commercial communities, and functions as a LoDo-specific chamber of commerce, visitors bureau, registered neighborhood organization, advocacy agent, and marketing entity. The Lower Downtown Neighborhood Association, the residential association, is a non-profit organization committed to seeking quality living conditions amid the mixed uses of the Lower Downtown area.

Because of the numerous bars and clubs in the area, LoDo is also a popular location for the nightlife of Denver.

View of LoDo and Mount Evans.

All content from Kiddle encyclopedia articles (including the article images and facts) can be freely used under Attribution-ShareAlike license, unless stated otherwise. Cite this article:
LoDo, Denver Facts for Kids. Kiddle Encyclopedia.