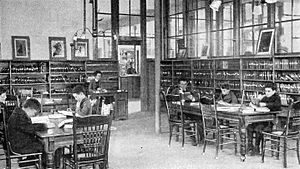 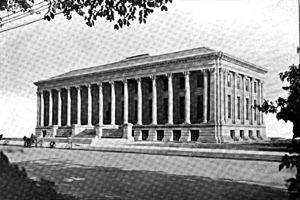 The Denver Public Library is the public library system of the City and County of Denver, Colorado. The system includes the Denver Central Library, located in the Golden Triangle district of Downtown Denver, as well as 25 branch locations and two bookmobiles. The library's collection totals more than 2 million items, including books, reference materials, movies, music, and photographs. Of that total, more than 347,000 items are in specific collections including the Western History and Genealogy Department, Blair-Caldwell African American Research Library, and Reference Department holdings.

The library evolved from the 1878 donation of books to the city's board of education, which were then maintained in a wing of East Denver High School. John Cotton Dana was named chief librarian and the "Denver Public Library" was officially established in 1889. The library moved into its own building in 1910, a Greek revival design funded by philanthropist Andrew Carnegie that was located in Civic Center Park downtown. Between 1913 and 1920, Carnegie also underwrote construction of the library's first eight branches. Previously the city relied on traveling trunks of books.

In the 1950s the city commissioned the architectural firm Fisher & Fisher and designer Burnham Hoyt to build a new Central Library to be located on Broadway and West 14th Avenue. The property had previously been an auto dealership for the Ford Model T, Model A, and Model B before being condemned by the City in 1953. The Fisher/Hoyt Central Library in the city's Golden Triangle opened in 1956 and was added to the National Register of Historic Places in 1990. As part of the dedication of the new library when it opened, Yale Library loaned a collection of books that included the 1455 Gutenberg Bible and 1640 Bay Psalm Book that are both rare and valuable artifacts. Throughout the 1950s and 1970s, Denver experienced an explosion of growth and quickly required more branches to be open to serve the new neighborhoods that branched out to the southeast and southwest. Among these branches were four Ross branches, funded with a $100,000 donation from Frederick Ross who was a Denver Real Estate Investor and the Library Commissioner. In the 1990s Denver voters approved a $91.6 million bond issue to add onto the Fisher/Hoyt building; the new 540,000-square-foot (50,000 m2) structure, designed by the 2012 Driehaus Prize winner Michael Graves and the Denver firm of Klipp Colussy Jenks DuBois, opened in 1995. The seven-story exterior is finished with limestone and pre-cast concrete with copper accents throughout. Murals are painted inside by the artist Edward Ruscha and fossils are embedded in its floor within the Schlessman Hall. There is also an art gallery within the Level Five Gates Western History Ready Room.

The Denver Public Library has a large Western History collection, which began under the direction of City Librarian Malcom G. Wyer and includes 600,000 photographs, 3,700 manuscript archives, 200,000 cataloged books, pamphlets, atlases, maps, and microfilm titles as well as a collection of Western fine art and prints. The quality of its collection of oil paintings rivals that of the Denver Art Museum next door. The library's collection includes western landscape paintings by Albert Bierstadt, Frederic Remington, Charles Marion Russell, Thomas Moran and Otto Kuhler, as well as a portrait of Colorado historian and Denver Post writer Caroline Bancroft.

The Western History Department holds the Otto Perry collection of railroad photographs, numbering 20,000 negatives from all parts of North America made available for viewing on the Internet.

The Western History and Genealogy departments merged in 1995 and are located on the fifth floor. The Genealogy department includes 60,000 books, 75,000 pieces of microform, and hundreds of magazine and newsletter titles, charts, clippings, atlases and manuscripts. From 1995 until 2015, The Western History Department worked on digitizing over 100,000 of its images to make them available online.

The Blair-Caldwell African American Research Library serves as an educational and cultural resource focusing on the history, literature, art, music, religion, and politics of African Americans in Colorado and throughout the Rocky Mountain West. The Library opened in 2003 and houses a full service branch library, research archives and the Western Legacies Museum, an exhibition space that spans more than 7,000 square feet (650 m2) and includes an African American Leadership Gallery, a replica of the Office of Denver Mayor Wellington E. Webb, and rotating exhibits which highlight historical periods, notable individuals and local Denver history.

All content from Kiddle encyclopedia articles (including the article images and facts) can be freely used under Attribution-ShareAlike license, unless stated otherwise. Cite this article:
Denver Public Library Facts for Kids. Kiddle Encyclopedia.