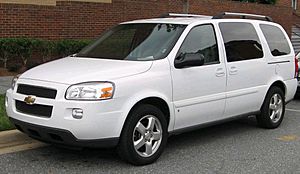 The Chevrolet Uplander was a minivan sold by the Chevrolet division of General Motorsf(GM)rom 2005-2009. The minivan replaced both the Venture minivan and the truck designed Astro. 2005 was the only model year for all-wheel drive this is due to the engine changing to a 3L V6 enging. GM said the AWD could not handle the torque. The Uplander was considered an imprpvement over its predecessor. It earned a Good in the IIHS' offset test and a Poor in side impact tests (without air bags, with air bags it earned an acceptable). While it was initially a decent seller compared to the Honda Odyssey and Toyota Sienna the Uplander's sales were poor. In 2008 GM announced that it would shut down Doraville Assembly which manufactured the minivans and decided to focus on crossover SUVs and introduced the Traverse.

All content from Kiddle encyclopedia articles (including the article images and facts) can be freely used under Attribution-ShareAlike license, unless stated otherwise. Cite this article:
Chevrolet Uplander Facts for Kids. Kiddle Encyclopedia.