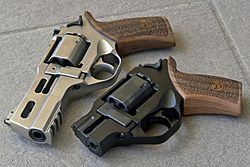 The Rhino is named after the rhinoceros because it looks somewhat like a rhinoceros's head. Most models shoot the .357 Magnum (as well as the .38 Special), but there are also models that shoot the 9x19mm Parabellum or the S&W .40. Due to its futuristic look, it is often shown in science-fiction movies like the live-action Ghost in the Shell, Terminator: Dark Fate, and the remake of Total Recall.

All content from Kiddle encyclopedia articles (including the article images and facts) can be freely used under Attribution-ShareAlike license, unless stated otherwise. Cite this article:
Chiappa Rhino Facts for Kids. Kiddle Encyclopedia.