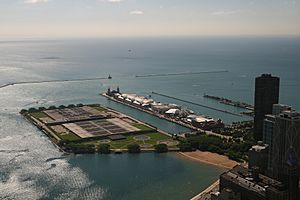 Chicago Harbor is made up of the public rivers, canals, and lakes within the territorial limits of Chicago. It connects all slips, basins, piers, breakwaters, and structures with a distance of three miles from the shore between the extended north and south lines of the city.

All content from Kiddle encyclopedia articles (including the article images and facts) can be freely used under Attribution-ShareAlike license, unless stated otherwise. Cite this article:
Chicago Harbor Facts for Kids. Kiddle Encyclopedia.