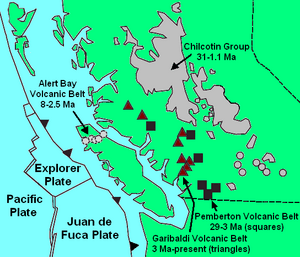 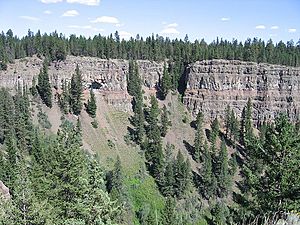 During the Miocene and Pliocene, a volcanic field occurred in British Columbia's Interior Plateau. The basalt is assumed to cover up to 50,000 km2 of the Pacific Northwest. It forms a medium-sized large igneous province, of volume 3300 km3.

Volcanism still continues from time to time. Eruptions were most vigorous 6–10 million years ago (mya) and 2–3 mya, when most of the basalt was released. Smaller eruptions continued from 1.6 mya to 0.01 mya.

All content from Kiddle encyclopedia articles (including the article images and facts) can be freely used under Attribution-ShareAlike license, unless stated otherwise. Cite this article:
Chilcotin Group Facts for Kids. Kiddle Encyclopedia.