Chindro (also known as Stapoo or Kidi Kada) is a popular rural game of Indian Sub-Continent. The game is played with a stone that tossed and slid on a marked off playing court. It is similar to hopscotch.

Chindro is game popular in Indian Sub-Continent. Though mostly considered a rural game, it is frequently played in many urban areas as well. Primarily it is a favorite pastime of small and teenage girls, but young boys too can take part in it. 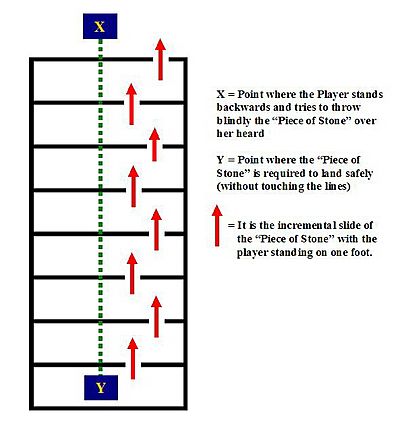 Diagram of Chindro playing court and motion of gameplay.

During the Taliban's rule, many sports for girls were banned in Afghanistan, including Chindro.

All content from Kiddle encyclopedia articles (including the article images and facts) can be freely used under Attribution-ShareAlike license, unless stated otherwise. Cite this article:
Chindro Facts for Kids. Kiddle Encyclopedia.