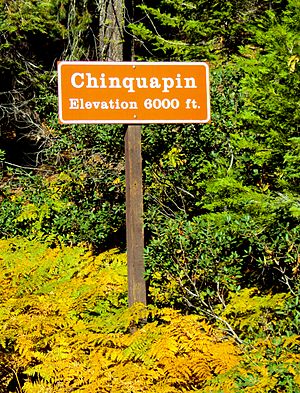 Chinquapin, elevation 6000 ft, is at the intersection of Glacier Point and Wawona roads

Chinquapin (also, Chincapin and Chinkapin) is a former settlement in Mariposa County, California. It was located 8.5 miles (14 km) north-northwest of Wawona. It is located within Yosemite National Park, adjacent to the community of Yosemite West. Chinquapin is the midway point between Yosemite Valley and Wawona, a community inside the park.

Chinquapin was built as a junction of the Old Glacier Point Road, which was built in 1882. 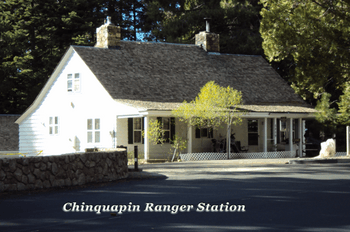 Previously it was a bridle trail to Glacier Point (the current Glacier Point Road, which starts immediately north of the old road was built in 1940). On an 1896 U.S. Cavalry map it is marked as "Chinquapin Station" 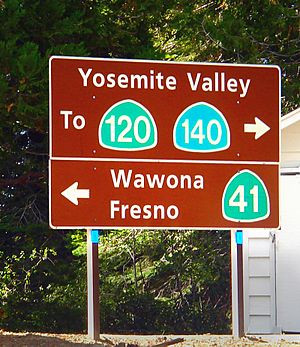 Chinquapin was the second ski area in Yosemite. This second ski area at Chinquapin was opened after the Wawona Tunnel was built (allowing Winter access). Before that, people skied on the glacial moraine in Yosemite Valley that is just east of the horse stables by the Pines Campgrounds. Later, the ski area moved from Chinquapin to Badger Pass on the Old Glacier Point Road. Today the ski area is in Simpson Meadow (below Badger Pass).

As referenced in the Yosemite Environmental Education Center, Final EIS report, "The Chinquapin Developed Area Cultural Landscape encompasses not only the features of the Chinquapin Historic District, but also includes the whole intersection as well as an associated water tank located approximately 600 feet from the Comfort Station (Sandy and DuBarton; 2007). The period of significance for the Chinquapin Developed Area is 1933 to 1938, during which the buildings and landscape were designed and built. Proposed contributing features include: the Glacier Point Road and Wawona Road intersection, the Ranger Station (1934), Garage / Storage (1934), Comfort Station (1933), and Redwood Water Tank (1936). 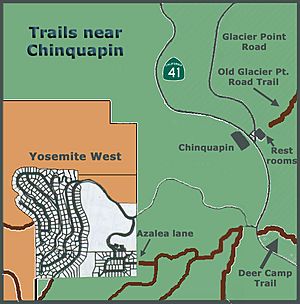 Map of Hiking trails in or near Chinquapin

Of the contributing structures evaluated as part of the Glacier Road Rehabilitation Environmental Assessment (NPS; 2007), the redwood water tank (located along the Old Wawona Road), the double pipe culvert along Wawona Road, the water fountain in front of the Chinquapin Comfort Station, and the island in front of the Ranger Station contribute to the significance of the Chinquapin Developed Area as a cultural landscape."

The skiing history of this community has faded through the years, accelerated by the loss of the gas station and store. Chinquapin today is a stopping point with new restroom facilities utilizing "State of the Art" fixtures as a testing ground for new waste water systems. This effort ties well to the addition of the new Yosemite Institute campus adjacent to Yosemite West. This new Campus, part of NatureBridge, a Yosemite National Park non-profit partner, aims to promote visitor understanding, stewardship, and appreciation of diverse park environments.

During the winter months, Chinquapin is used as a tire-chain installation point before the ascent to Badger Pass Ski Area. There are usually crews and rangers on hand during snowy periods to aid the visitor on proper installation of the chains on their vehicles. If weather conditions exceed the limits of safety or if Badger Pass ski area has no the available parking spaces, rangers will close the gates to Glacier Point Road at the Chinquapin intersection to all ascending vehicles.

The Deer Camp trailhead is just south of Chinquapin and Glacier Point Road. As you hike along the trail above Hwy 41, it passes over Rail Creek and Strawberry Creek on its way to Deer Camp on Empire Meadow. The trail’s endpoint is at the town of Wawona.

The Old Glacier Point Trail begins at Chinquapin and is the only other trail in the vicinity of the site. It begins about 100 feet behind the bathroom facility, behind the old water tank in Chinquapin. As the name suggests it is the former road and leads northeast. On several trail maps, this trail is marked “This reconstruction of the bridle trail from Chinquapin to Glacier Point as a 16-foot wide wagon road, allowed vehicle access to Glacier Point. In 2000, it was found to eligible for the National Register of Historic Places under Criteria A, B and C by Nave (2000) as indicated in Sandy and DuBarton (2007). In addition, Nave recommended that the remaining intact portions of the Old Glacier Point Road be recorded and added and that the entire route be nominated as the Old Glacier Point Road Historic District.”

All content from Kiddle encyclopedia articles (including the article images and facts) can be freely used under Attribution-ShareAlike license, unless stated otherwise. Cite this article:
Chinquapin, California Facts for Kids. Kiddle Encyclopedia.