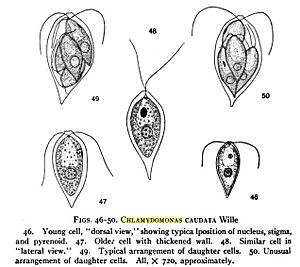 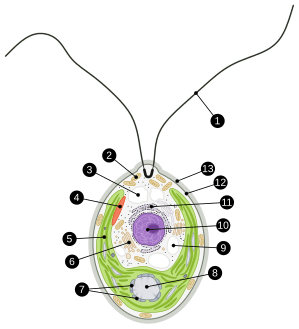 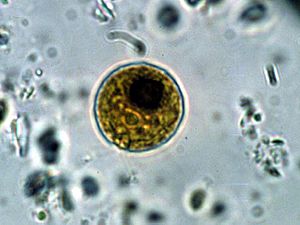 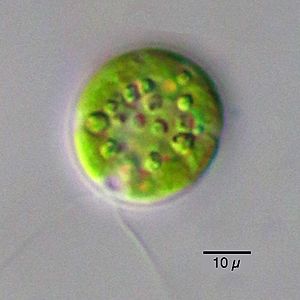 Chlamydomonas is a genus of green algae consisting of about 325 species all unicellular flagellates, found in stagnant water and on damp soil, in freshwater, seawater, and even in snow as "snow algae". Chlamydomonas is used as a model organism for molecular biology, especially studies of flagellar motility and chloroplast dynamics, biogenesis, and genetics. One of the many striking features of Chlamydomonas is that it contains ion channels (channelrhodopsins) that are directly activated by light. Some regulatory systems of Chlamydomonas are more complex than their homologs in Gymnosperms, with evolutionarily related regulatory proteins being larger and containing additional domains.

Molecular phylogeny studies indicated that the traditional genus Chlamydomonas defined using morphological data was polyphyletic within Volvocales, and many species were reclassified (e.g., in Oogamochlamys, Lobochlamys), and many other "Chlamydomonas" lineages are to be reclassificated.

Unicellular cells, spherical or slightly cylindrical, a papilla may be present or absent. Chloroplasts green and usually cup-shaped. A key feature of the genus is its two anterior flagella, each as long as the other.

Chlamydomonas is widely distributed in freshwater or damp soil. It is generally found in a habitat rich in ammonium salt. It possesses red eye spots for photosensitivity and reproduces both asexually and sexually.

Most species are obligate phototrophs but C. reinhardtii and C. dysostosis are facultative heterotrophs that can grow in the dark in the presence of acetate as a carbon source.

All content from Kiddle encyclopedia articles (including the article images and facts) can be freely used under Attribution-ShareAlike license, unless stated otherwise. Cite this article:
Chlamydomonas Facts for Kids. Kiddle Encyclopedia.