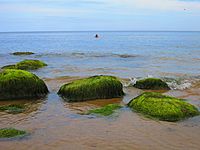 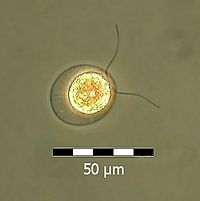 Some Chlorophyta are single cells. Most species have a single-celled stage in their life cycles that swim using flagella. Haematococcus pluvialis

Chlorophyta are a division of green algae.

It includes about 7,000 species of mostly aquatic photosynthetic eukaryote organisms.

Like the land plants, green algae contain chlorophylls a and b, and store food as starch in their plastids. Most species are flagellate in at least one stage of their life cycle.

They are related to the Charophyceae (also called Charophyta) and land plants, together making up the Viridiplantae.

The division contains both unicellular and multicellular species. While most species live in freshwater habitats and a large number in marine habitats, other species are adapted to a wide range of environments. Watermelon snow, or Chlamydomonas nivalis, lives on summer alpine snowfields. Others live attached to rocks or woody parts of trees. Some lichens are symbiotic relationships between fungi and green algae.

All content from Kiddle encyclopedia articles (including the article images and facts) can be freely used under Attribution-ShareAlike license, unless stated otherwise. Cite this article:
Chlorophyta Facts for Kids. Kiddle Encyclopedia.