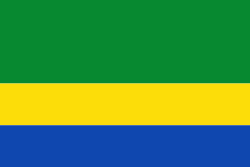 Chocó Department is a department of Colombia known for its large Afro-Colombian population. It is in the west of the country. It is on the border to Panama. The capital is Quibdó.

The Chocó Department makes up most of the ecoregion known as El Chocó that extends from Panama to Ecuador.

All content from Kiddle encyclopedia articles (including the article images and facts) can be freely used under Attribution-ShareAlike license, unless stated otherwise. Cite this article:
Chocó Department Facts for Kids. Kiddle Encyclopedia.