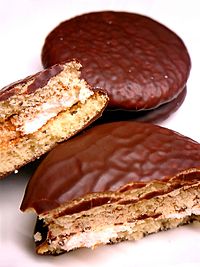 A choco pie (Hangul: 초코파이) is a snack cake consisting of two small round layers of cake with marshmallow filling with chocolate covering. The term originated in America but is now also used in other parts of South Korea as either a brand name or a generic term. Names for similar confections in other places include chocolate marshmallow pie, Wagon Wheels, angel pie, and moon pie.

The origin of Choco Pie goes back to 1917 in the American South. Chattanooga Bakery in Chattanooga, Tennessee created the Moon pie with Graham crackers and marshmallow filling which is similar to the Choco Pie of nowadays.

Tongyang R&D, the snack company of South Korea, began selling a similar type of chocolate cake with marshmallow filling named 'Orion Choco Pie' in 1974. A member of the company was inspired by a chocolate-coated cake in a restaurant in a hotel in the U.S. state of Georgia on a business trip. After he got back to Korea, he made many experiment to make that kind of chocolate cake. Finally, he created the Choco Pie as it is known to Koreans now. Later Tongyang R&D changed its name into Orion Confectionery because of the success of 'Orion Choco Pie'. In addition, similar versions of Choco Pie were produced by Lotte Confectionary and Crown Confectionery.

From the 2000s, Orin Choco Pie has been exported all over the world. World sales were 12.1 billion Choco Pies, and a third of Orion’s profits is from outside Korea. Orion has four major share markets- South Korea, China, Vietnam, and Russia. Also it is exported to North Korea, and it is sometimes used as bonuses for North Korean workers.

All content from Kiddle encyclopedia articles (including the article images and facts) can be freely used under Attribution-ShareAlike license, unless stated otherwise. Cite this article:
Choco pie Facts for Kids. Kiddle Encyclopedia.