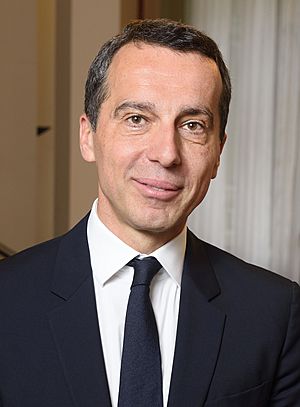 Christian Kern (born January 4, 1966 in Vienna) is an Austrian politician of the Social Democratic Party of Austria (SPÖ). He was the leader of the SPÖ from June 25, 2016 to September 25, 2018. He was replaced by Pamela Rendi-Wagner.

Kern was Chancellor of Austria from May 17, 2016 to December 18, 2017. His predecessor was fellow party member Werner Faymann, his successor is Sebastian Kurz (ÖVP).

After studying journalism and communication at the University of Vienna, he worked as a business journalist and a civil servant. Afterwards he worked at the Verbund AG, the biggest supplier of electricity in Austria. He became chief of the ÖBB, the federal railways of Austria, in 2010.

All content from Kiddle encyclopedia articles (including the article images and facts) can be freely used under Attribution-ShareAlike license, unless stated otherwise. Cite this article:
Christian Kern Facts for Kids. Kiddle Encyclopedia.