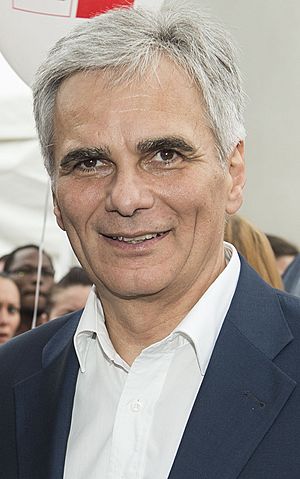 Werner Faymann (born 4 May 1960 in Vienna) is an Austrian politician. He belongs to the Social Democratic Party of Austria.

He was transport, innovation and technology minister from 2007 to 2008.

His party won the elections of the National Assembly in 2008. As a result he was the Federal Chancellor of Austria from 2008 to 2016. He was succeeded by Christian Kern.

All content from Kiddle encyclopedia articles (including the article images and facts) can be freely used under Attribution-ShareAlike license, unless stated otherwise. Cite this article:
Werner Faymann Facts for Kids. Kiddle Encyclopedia.