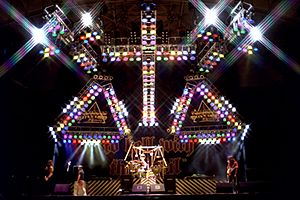 Stryper's stage set during To Hell with the Devil tour, 1986

Christian metal bands exist in all the subgenres of heavy metal music, and the only common link between most Christian metal bands are the lyrics. The Christian themes are often melded with the subjects of the genre the band is rooted in, regularly providing a Christian take on the subject matter. It has been argued that the marginal yet transnational Christian metal subculture provides its core members an alternative religious expression and Christian identity, and that the music serves the purpose of offering a positive alternative or counterbalance to secular metal music which is known for its generally dark and negative message.

Christian metal emerged in the late 1970s as a means of evangelism to the wider heavy metal music scene, and was pioneered by the American Resurrection Band and Swedish Jerusalem. Los Angeles' Stryper achieved wide success in the 1980s, otherwise the genre was mostly ignored by the mainstream. California's Tourniquet and Australia's Mortification led the movement in the 1990s. The metalcore groups Underoath, Demon Hunter, As I Lay Dying, and Norma Jean (dubbed by Revolver Magazine as "The Holy Alliance") brought some mainstream attention to the movement in the first decade of the 21st century, achieving ranks in the Billboard 200.

All content from Kiddle encyclopedia articles (including the article images and facts) can be freely used under Attribution-ShareAlike license, unless stated otherwise. Cite this article:
Christian metal Facts for Kids. Kiddle Encyclopedia.